A Tribute to Gene “Hughes” Costin 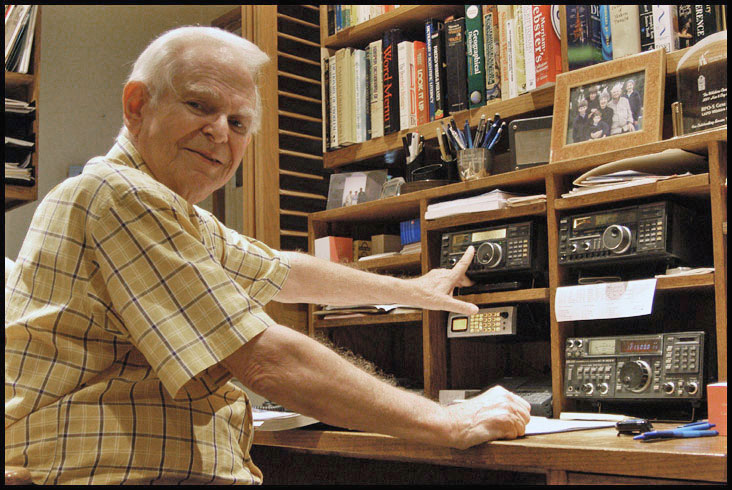 When you mention Gene Hughes’ name around fellow scanner listeners, amateur radio operators, and public safety people, most of them know who you mean. “Oh yeah, the guy who writes the police frequency book!”

Many of us looked forward to getting the new copy of Gene’s book every year (blue cover one year, pink cover the next) and seeing what new and great frequencies we could find to monitor. From San Diego to Ventura County all of us had the latest freq’s, to tune into.

I remember back in 1974 as a member of RCMA when I first heard the name Gene Hughes. One of the club members told me, “He’s the guy who writes the Police Call frequency book.” Then Tom handed me a copy to look at and, with that one look inside Gene’s book, I was hooked and wanted to know even more.

It was in1984 when I first meet Gene at Jun’s Electronics in Culver City.  We started talking and, the next thing I knew, we had become good friends. From 1984 to 1988 Gene and I kept in touch by telephone and I would advise him of one or two new frequencies that I had heard. He would check them out and add them into the book.

In 1988 Hugh Stegman and I, who where both RCMA members, came up with the Idea of starting the West L.A. Chapter of RCMA because driving out to the meetings in Anaheim once a month was a bit much with traffic and all. So, the West L.A. Chapter was formed. When I told Gene what we had done I remember him saying that it was a great idea! After four months we had a membership of around 30 to 40 people and, when Gene had time, he would make the meetings too.

In 1989 I went to visit Gene at his home and we talked about what changes could be made to the book. Gene asked me if I had any time to get more involved in doing the book with him…and I said yes! The Police Call book would start to change, but only a little bit each year. As most of you in SCMA know, Gene was set in his ways and, I will tell you now, it was an uphill battle to add and change things in the book. After all it was Gene’s baby! 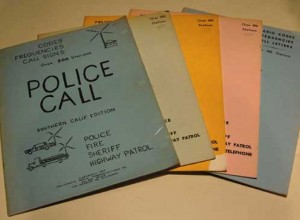 I remember one year I went over to Gene’s house with about 60 pages of new frequencies and maps for Police Call. Gene just looked at me and said, “Oh, my God! What am I going to do with all this?” We talked for about 30 minutes and Gene said to me, “You know I will have to raise the price of the book from $9.95 to $14.95.” Later, he changed his mind and set the price at $12.95 because he was afraid that no one would pay more.

In 1995 I designed a new cover to change the look of Police Call. Gene liked the idea but, you know Gene. He only used the fire truck and the CHP car on the cover! It was only then that he had told me the story about the color covers of the Police Call book. He told me that over the years he had tried different colors like Green and Red but, when he used those two colors, the book did not sell very well. Also he tried Orange and it, too, had lower sales. The colors Light Blue and Pink sold very well and Gene stayed with those two colors to the end.

I remember that Gene always liked to have more maps in police call and I had to draw a few of the things. Gene would show me all the letters and emails form scanner listeners who would give frequencies or changes over the years and some of the information was really good. Gene had his group of regulars who sent in stuff!

I never helped Gene with the statewide editions of Police Call. Those had to be done a different way because they were sold at Radio Shack and there was a timetable that they gave him. Because of the production schedule for the catalog that Radio Shack used to put out, there was a 6 month lead time in preparing the books. A lot of the state editions were FCC printouts with some, but not much, detailed changes to it due to the amount of data that had to be processed.

Gene loved to attend our monthly SCMA meetings. He always had the latest updates and he had some great stories to tell us. Gene was a lifetime member of SCMA and always gave to the club to help out with some of the things we needed to keep the club going.

I remember Gene calling me up on the telephone and asking me to come over to his house. There were a few things he wanted to discus with me. Gene was already at the front door when I arrived. I went in and followed him to his office. Gene said to me, “Rick, I am going to retire” I said from LAPD Wilshire station? “No,” he said. “Police Call!”

I could not believe my ears and I told him he can’t do that.  But Gene just looked at me and said that it was over and to please do not tell anyone! This was one of the hardest things I ever had to do. I was so sad when I left his house, and I was the only one to know that there would be no more Police Call books. 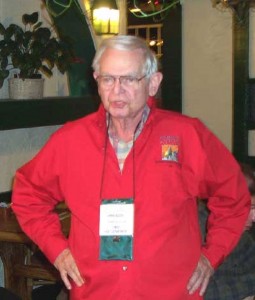 Later, Gene announced the sad news at a club meeting and a few days later the scanning world knew it all.

Gene had known for a couple of years that I wanted to do my own frequency directory guide and he told me that now was the time! So in the summer 2004, and with tons of information and some input from Gene, “The SCAN Directory” for 2005 was published. I told Gene that I now know that what he had been telling me all these years was true: that it was hard work doing a book! I told Gene that for now I was only doing a Los Angeles and Orange Counties Guide due to the overload of information and trying to keep it all up to date. Gene said to me, “Always do your best. If you do that no one will be mad with you. People think it’s an easy job, but it’s not.”

Gene and I had worked well together over the years and he was like a second father to me. I always listened to what Gene told me and I will miss the advice and friendship that he gave me.

I will continue to turn out a scanner book for those who want it and I will try putting out a CD edition which Gene and a few others had a chance to see an early copy of. After Gene saw it he told me that he had thought it could possibly be “Police Call” – the next Generation! Gene was a great man in our community and I will miss him very much.  Gene is now E.O.W. May he rest in peace.