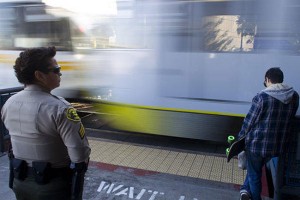 A hard-hitting new audit says the L.A. County Sheriff’s Department has failed to live up to its multimillion dollar contract to police the Metro system, while the transit agency itself has done a poor job of monitoring the sheriff’s performance.

The audit was commissioned by Metro’s Board of Directors last year and performed by the firm Bazilio Cobb Associates, with a team including members of the Bratton Group, LLC. The May 27 report faulted the sheriff on a number of fronts, including lack of a community-policing plan for the nation’s third-largest bus and rail system, perennial staff vacancies, tardy responses to citizen complaints and inadequate records to support its billings.

Overall, the audit determined that both the Sheriff’s Department and Metro had significant improvements to make.

“We found that Metro needs to substantially strengthen and enhance its oversight of LASD contract performance,” it said. “We found LASD has not met many of the targets for performance metrics, including crime reduction, continuity of staff, and fare enforcement saturation and activity rates.”

The audit was presented to Metro’s System Safety and Operations Committee on Thursday. CEO Art Leahy told the panel that new management at the sheriff’s department now has “an intense focus on delivering the goods here. There’s no finger-pointing, there’s no excuses. They can do better and Metro can do better.”

Sheriff’s Cmdr. Michael Claus, while disagreeing with a few of the report’s conclusions, said most of its 50 findings were on target.

“The bottom line is: we didn’t do what we should have done,” Claus said in an interview. “No one likes to be told they’re not doing a good job, but they were right in a lot of areas.”

Claus, who became Metro’s head of security in January, said reforms already are underway. Those include upgrading the Transit Services Bureau into a full-fledged sheriff’s division with its own chief, to whom Claus now reports. That move, effective July 1, will give structure to the team and enable it to advocate more effectively for staff resources, Claus said. It also may be a morale-booster for deputies assigned to the transit beat, which the audit said has been considered undesirable or even punitive by some within the department.

“By making it its own division, probably 20 people have removed their transfer requests,” Claus said.

The audit comes as the sheriff’s Metro contract—by far the department’s largest—is up for renewal. The new contract will likely be worth more than $400 million over five years, the report said. The department currently is working under a $42 million six-month contract extension that expires on Dec. 31.

The audit covered five years beginning July 1, 2009 and found lots of room for improvement. Among its findings:

The audit also said the sheriff’s transit security team was not engaged enough in making quality of life improvements in Metro facilities.

But, according to the sheriff’s department, that finding overlooks a notable recent success story.

“Deputies have made tremendous strides in cleaning up Union Station; examining and solving delicate homeless rights issues, solving quality of life issues, making the area a cleaner, hazard-free experience for patrons, etc.,” according to the official response to the audit from interim Sheriff John Scott. “More is to be done, but to say that great strides have not been obtained would simply not be reflective of the current status.”

As for Metro, the audit found that the agency has failed to set forth adequate contractual requirements for the sheriff’s department, and has been lax about keeping tabs on the requirements that are in place.

In a response to the audit, Duane Martin, the agency’s deputy executive officer for project management, wrote that his department is asking for more staff to provide better contract oversight. He said Metro also will seek to modify its existing contract to enable it to seek damages if the sheriff doesn’t live up to specified performance targets—including crime reduction and continuity of staffing—and will write that into the next contract as well.

Beyond the audit, Metro CEO Leahy said he also has ordered a peer review of his agency’s security services by the American Public Transportation Association. Those findings will be examined, along with the audit, by Metro’s board this fall.