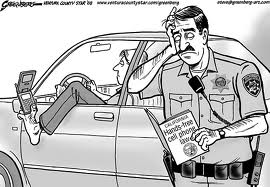 A California ham has been cited for operating mobile using a 2 meter radio installed in his car and this could become a test case to find out whether the restrictive anti-cellphone law can be used against other two-way radio users.

According to a note from Dick McKay, K6VGP, a member of the Disaster Amateur Radio Network identified as Irving Osser, KE6YR, received a ticket for using his amateur 2 meter radio in his car.

But the officer was not interested in hearing about any of it and it has now became a tell it to the judge matter. And here is where the possibly becoming a test case for the California law. This is because Osser is an attorney by profession and plans to represent himself in court with the proper knowledge about how to address the subject.

While California does not provide any exceptions for ham radio operators, CB’ers and other non-emergency two-way radio users, by definition, two-way radio gear is not a hand held cellular telephone. None-the-less, KE6YR will still have the burden to prove in court that what he was doing was legal and that he was in fact not using a wireless telephone as defined by law. (K6VGP)