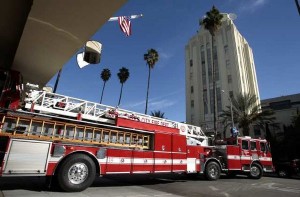 The story was first reported by NBC4 LA, which posted clips from the video, showing a scantily clad actress exposing herself to passersby on Venice Beach.

At one point, she approaches a parked fire truck from Station 63 in Venice and exclaims, “Look at this fire truck! Isn’t that nice?” before climbing onto a fire truck and exposing herself to the camera.

A second shoot allegedly used a truck from Station 41 in Hollywood.

The investigation is trying to determine to what extent fire personnel had knowledge of the shoot and whether any firefighters participated, he said. No firefighters have been fired or placed on leave in relation to the incidents to date, he said.

The NBC4 report alleged that firefighters helped to set up the shoot and actually appeared in the video watching the shoot. (The onlookers’ faces were blurred out in the video posted). Moore said that is part of the investigation but could not confirm what involvement, if any, the firefighters had.

“They’re trying to determine whether the firefighters really knew this was going to happen, did they participate, and why wasn’t someone on the engine?” he said.

Personnel at the Venice and Hollywood fire stations reached by telephone declined to comment.

“It’s not one of our proudest moments,” Moore said. But he said the department’s new chief, Brian Cummings, is “adamant that he’s not going to tolerate this kind of stuff.”