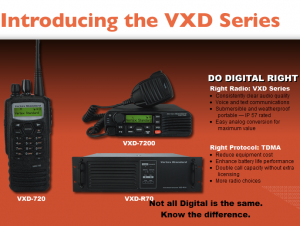 “The new VXD Series enables analog radio users to gradually upgrade to digital as needed to make the most of their radio investments,” said Mike Gray, Vertex Standard North America LMR Sales Vice President. “The portable and mobile radios operate in both analog and digital modes making conversion to digital flexible and easy. If budget is an issue, users can gradually evolve from analog to digital as required to best address their functional and financial needs.”

The VXD Series also operates on the most widely-used digital mobile radio protocol known as Digital Mobile Radio (DMR), which uses 2 slot TDMA (time division multiple access) in 12.5kHz channels. “When switching to digital, customers need to understand that the operating protocol is an important factor for supporting a more dynamic and flexible digital radio system,” Gray said. “Unlike analog where any brand of radio can be used together, not all digital radios are the same — the radios can only communicate if operating on the same protocol. The VXD Series is designed to work with other DMR TDMA radios, so users benefit by getting more choices of interchangeable digital equipment.”

While analog radio users are required to operate radios at 12.5 kHz efficiency by December 31, 2012, the VXD Series enables users to meet the FCC recommendation to convert directly to 6.25 kHz equivalent efficient equipment for greater spectrum efficiency.

Get more information about the VXD Series at: www.dodigitalright.com