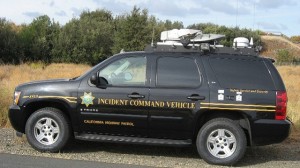 There’s a lot that can go wrong on California’s 15,181 miles of highway. When major catastrophes strike and an immediate, large-scale, coordinated response from multiple agencies is needed, the California Highway Patrol calls on its fleet of Incident Command Vehicles—the mobile hive-minds of public safety.

Prompted by the communications failures that hampered rescue efforts after the 9/11 attacks, the CHP purchased and equipped nine Chevy Tahoes in 2007 for $2 million total. They’re outfitted with a bevy of communication equipment including satellite, VoIP, cellular, multi-band radio, and net access that allow it to provide command and control at major incidents. These trucks provide seamless coordination between local and state law enforcement as well as first responders and other government agencies—essentially replacing a brick-and-mortar CHP office.

Not only that, the ICV can also downlink live feeds from CHP and interdepartmental aircraft via microwave transmission and provide the commanding officer with satellite surveillance. Even if, say, an earthquake strikes and knocks out critical infrastructure, the ICV can step in and and reestablish those channels, allowing officers to focus on maintaining order.

The centerpiece of the ICV is its JPS ACU-1000 Gateway system, which interconnects up to 24 devices on any band of two-way radio—VHF, UHF, 700 MHz, and 800 MHz—with cellular, landline, and satellite media. It can also be networked to create potentially hundreds of RoIP (radio)/VoIP (voice) talkpaths. And while the system can be controlled from any computer with the necessary software installed, the ACU-1000 can work without a network connection—because it makes its own.

And, unlike the gigantic tour bus-sized C&C centers that many metropolitan law enforcement maintain, these ICVs can be deployed much more quickly and with much less expense. Which means, in turn, that they can be used more frequently, and at a wider variety of incidents throughout the state.