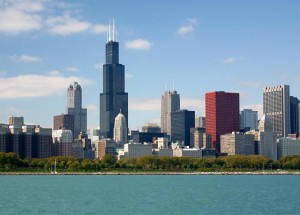 The city of Chicago is questioning the FCC over a new law requiring them to move off the T-Band.  Will other areas that heavily use the T-Band (like Los Angeles and the planned LA-RICS system) follow?  This is going to be an interesting debate.

With a new law mandating that the city of Chicago must vacate its T-Band spectrum during the next decade and the absence of alternative spectrum, the city this week asked the FCC for an opinion clarifying the city’s long-term communications alternatives, so it can make long-term plans for mission-critical voice.

As part of the law that reallocated the 700 MHz D Block to public safety and provided $7 billion to fund the buildout of a nationwide broadband network for first responders, Congress required public-safety entities operating system in the T-Band (470–512 MHz) to vacate their spectrum in nine or 11 years. While moving existing T-Band operations would be costly — an estimated $275 million — it is not possible unless comparable spectrum is provided in another band, according to a letter from Chicago’s office of emergency management and communications.

“All of the funding in the world will not enable the city to conform its radio networks to the letter of the legislation, without extreme harm and threat to the citizens of Chicago and surrounding area, absent some viable location upon the radio spectrum to which that traffic might be safely moved,” the letter states, noting that the city already has spent $23 million on upgrades to its existing system and planned to spend more if allowed to remain in the T-Band.

“The city’s action in its current groundwork building UHF and UHF T-band infrastructure is the long-term investments for which we have been committed to for over 40 years, and is the only viable spectrum solution in today’s environment. The city cannot wait for 2, 5, or 9 years for additional spectrum to become available, since our needs are today. The alternative is nearly too harsh to consider, but must be addressed.”

If no remedial spectrum options are presented, the new law “exceeds the boundaries of rational legislation” and decades of planning could be undone, according to the letter.

“The thought that the city’s vital public safety radio networks can be turned to junk without any recourse or alternative spectrum is beyond disturbing,” the letter states. “It is, moreover, a waste and condemnation of public property without consideration to the affected interest of officer or citizens.

“Chicago respectfully requests that the commission address the issues discussed herein and provide to the city and surrounding areas an advisory opinion that will assist the city in obtaining a greater appreciation for federal policies threatening the city’s public safety radio systems and its funding of same.”

Chicago is not alone among public-safety T-Band users in asking such questions, but each T-Band situation is different, according to Harlin McEwen, chairman of the technology committee for the International Association of Chiefs of Police (IACP).

Indeed, some T-Band entities already have narrowbanded their systems, and others are in the process of doing so. In some cases, there may be alternative spectrum available — 700 MHz narrowband airwaves or UHF channels cleared via the narrow banding process — but there is nothing comparable to the T-Band in the Chicago area, according to the letter.

One other option proposed by Charles Dowd, deputy chief for the New York Police Department, is that public-safety agencies operating in the T-Band should be exempt from narrowbanding, so they can use the financial resources that would have been dedicated to that effort to help fund deployment of 700 MHz LTE systems. However, there is no mission-critical voice application established for LTE system today, and no one is certain when mission-critical voice will be an option over broadband—some industry sources believe it could be realized within three years, while others believe it will take decades, if it can be accomplished at all.