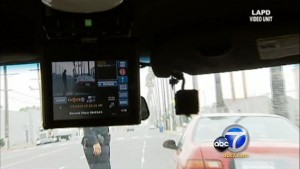 The Los Angeles Police Commission Tuesday approved a nearly $8 million contract to place 381 dashboard cameras in police cruisers in LAPD’s Operations-Central Bureau, which would more than double the number of cars currently outfitted with the technology.

The additional cameras will take approximately 12 months to put in place once the contract is approved by the City Council and Mayor Eric Garcetti, and commission members urged the department’s commanding officer for the Information Technology Bureau to continue to push for timely backing at City Hall.

“I’ve already asked that the next reports be prepared. I’ve been pushing even before the approval,” chief information officer Maggie Goodrich told the commission.

The department’s Southwest Area was the first to get the cameras in 2010.

Goodrich told the commission that outfitting the rest of the city, including the Valley Bureau, would cost about $20 million, but that funding is not immediately available.

Still, the commission was enthusiastic about the contract with El Segundo-based Raytheon Co., which fits into its plans to add more eyes on officer interactions with members of the community.

The in-car technology uses two mounted cameras. One wide-angle camera is mounted in the front of the car, and another fish-eye angle lens is mounted to observe the rear cabin of the car. Video clips are uploaded and stored for later review, and can be tracked through software created by Texas-based COBAN Technologies, which also provides the camera hardware.

The department’s first contract, for the Southwest Area cameras, was with IBM. While IBM has been replaced by Raytheon in the new round, COBAN was the subcontractor that provided most of the hardware and software for the project.

“We provide a turnkey solution that combines both the hardware and the software,” said David Hinojosa, senior vice president of marketing and business development for COBAN. “So with the evidence-management software, even if we have newer versions of the hardware, it will all still work.”

That means there won’t need to be costly upgrades to Southwest area’s cameras or the back-end system to keep the video management — useful in investigations and prosecutions — intact throughout the department.

“When there are upgrades to the software, it will be the same throughout the department, even if they add more cameras later,” Hinojosa said.

The lengthy process of adding the dashboard cameras has drawn criticism, but there has been a new push for both the in-car video recorders and body-mounted cameras for officers to wear under both Chief Charlie Beck and newly appointed commission President Steve Soboroff.

Soboroff said last month he hopes to have body-mounted cameras in use by about 1,500 officers next year, and he plans to use private money to purchase them. He has also supported the additional dashboard cameras.