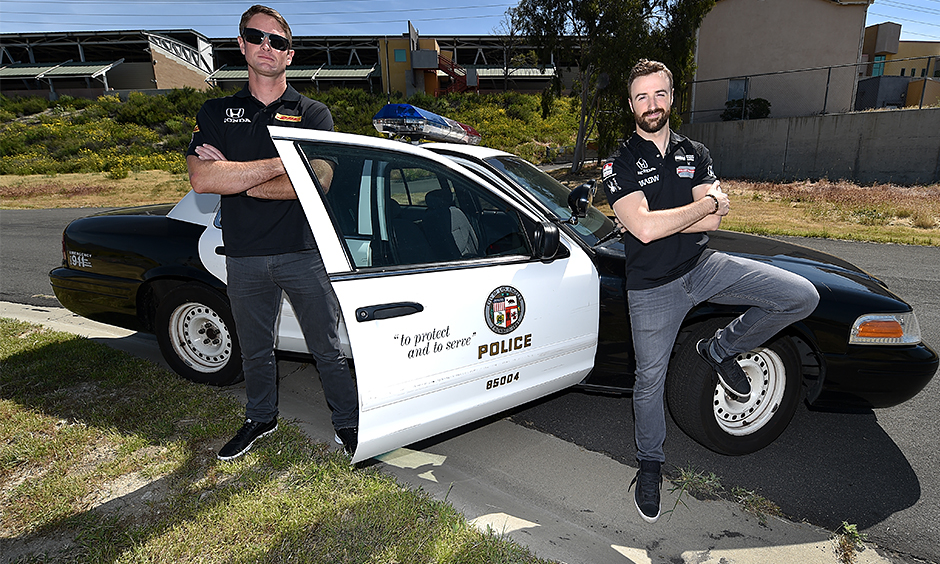 Verizon IndyCar Series drivers are used to sharing race feedback with their team engineers, but Wednesday they worked together with the Los Angeles Police Department to discuss police pursuits and driving techniques.

Indianapolis 500 winner Ryan Hunter-Reay and four-time Verizon IndyCar Series race winner James Hinchcliffe visited the LAPD’s Davis Training Facility, where officers and recruits receive instruction that prepares them for careers in the field. The drivers were in town for this weekend’s Toyota Grand Prix of Long Beach, which takes place Friday through Sunday.

The 44-acre facility completed in 1999 trains police officers for the difficult task of conducting pursuits and responding to calls in a safe and timely manner. It consists of a road course that includes a light controlled intersection, two skid courses, an area for high-speed reverse driving, a collision avoidance simulator and law enforcement driving simulators. 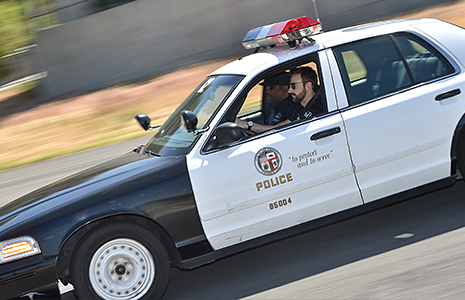 “It was a unique and very worthwhile experience to have such talented drivers here at our facility to share their knowledge and experience,” said Officer Alex Penrith, who gave the driving instruction. “Once they understood our mission, they were able to share ideas on staying focused behind the wheel, controlling stress and not overdriving.”

Hinchcliffe and Hunter-Reay received basic instruction on the intricacies of police driver training. Though the drivers hold a combined 20 Verizon IndyCar Series race wins, preparing for a police pursuit was not their typical day at the track.

“Their experience and maturity was very obvious from the first turn,” Penrith continued. “They were very quickly able to adapt to our police vehicles and safely operate them at speed. A pursuit is complicated and takes a great deal of training to get right.  If the racing thing doesn’t work out, we would gladly accept their applications.”

Through the hands-on experience, Hinchcliffe and Hunter-Reay received a close-up perspective of the challenges officers face in their line of work. Law enforcement officials often find themselves in situations where they have to make smart decisions quickly, just as Verizon IndyCar Series drivers do on the racetrack.

“There’s a lot of similarities here,” said Hunter-Reay, the 2012 series champion and 2014 Indy 500 winner. “With the high-stakes environment in the Verizon IndyCar Series, the consequences that go with driving on the edge – the police officers here at the LAPD, the split-second decisions that they have to make are life and death — it’s similar to ours in that way, but they have so many more variables. They have traffic, they have pedestrians and keeping your cool and not getting the red mist, or low eyes as we call it, is key for them.” 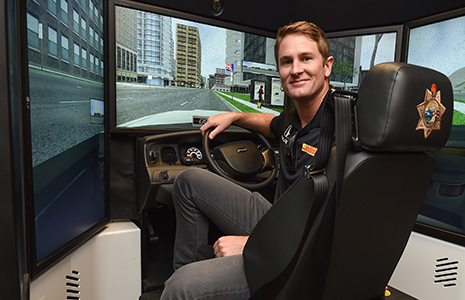 Hinchcliffe, who lived in Los Angeles for several months last year while competing and finishing runner-up on Season 23 of “Dancing with the Stars,” gained an even deeper respect for the officers through the experience.

“We got a huge insight into what actually goes into their training and what goes into the job of being in pursuit of a suspect,” Hinchcliffe said. “It’s not just flat out on the gas and chasing a guy, there’s a lot of things they have to go through in the heat of the moment.”

The drivers also tested out shooting and driving simulators, which the officers use to simulate real-life situations that also teach quick, smart decision-making.

At the end of the event, Hunter-Reay and Hinchcliffe presented the officers with a commemorative milk bottle signifying the lead-up to the 101st Running of the Indianapolis 500 presented by PennGrade Motor Oil next month, where the race winner celebrates by drinking a bottle of milk in Victory Circle.