Drill rigs and concrete trucks crawl up mountaintops at the break of dawn, forming silhouettes along LA basin and northern desert hillsides. Delivery trucks loaded with tower steel and heavy earth moving machinery mark the start of 2018 in grandiose fashion for the Land Mobile Radio (LMR) construction throughout LA County. 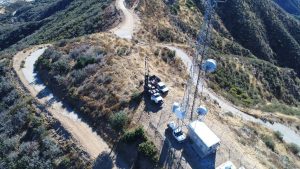 “Construction activities over the last month have picked-up significantly since Q4 2017.” said Deputy Program Manager Justin Delfino.  The uptick in construction spending is expected to rise and remain constant through the Spring of 2018 since a large batch of sites were eligible for build-out and weather has not been a constraining factor.

The overall build-out plan for the LMR network entails a completion of 60 sites by the year 2020. When fully deployed, the network will provide coverage to public safety users in the entire County of Los Angeles, including the Los Angeles Basin, the Los Angeles Coastline, the Angeles National Forest, and Santa Catalina Island. 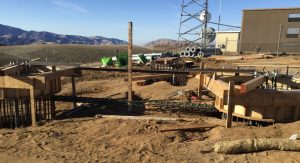 The LMR system will provide interoperable radio communications between LA County regional emergency responders and all member agencies, and has been designed to work seamlessly with the existing Public Safety Broadband Network (LTE System). The network will deliver new features to emergency responders via the push-to-talk functionality, and exploit the opportunity for newly developed applications and technologies making emergency responders even more efficient and safer while on the job.

Behind the scenes, the LMR RF Design and Backhaul Engineering Teams have undergone the final stages of planning and completed the network design for all system sites. Path surveys have been completed on all microwave links, verifying line-of-sight connectivity between land mobile radio towers. Procurement of radio equipment is a process that will span the duration of the site construction phase.  The LMR Project Team plans to test and turn up equipment for initial testing as sites draw to completion and will test the network regionally prior to testing the system as a whole.