When over a dozen people became trapped by the Camp Fire last week, a firefighter sent them wading into the Lake Concow reservoir. 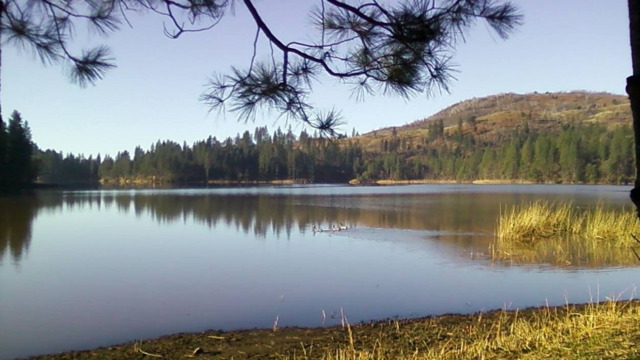 Nov. 14 — CONCOW, CA — When Scott realized that his lakeside home in the wooded hills of Butte County was surrounded by fire, he knew he had only one way out: the water.

He, his wife and their two young adult sons, along with two dogs and a cat, plunged into the chilly Concow Reservoir 20 miles east of Chico last Thursday as flames singed the giant tule reeds on shore behind them.

Not far from the family, at least a dozen others, some elderly, had also rushed into the mountain lake, all wearing what they’d woken up in. They were from a caravan of vehicles that a firefighter had been trying to escort away from the early-morning blaze before the group ran into the same wall of fire as Scott, who asked to be identified only by his first name.

The firefighter ordered the drivers out of their vehicles and into the murky water.

As time passed, the sizzling heat from the shoreline forced some to go deeper into the lake. Theirs would become another astonishing tale of survival from the Camp Fire, which continued to grow Tuesday after becoming the deadliest and most destructive inferno in California history.

Among those saved was 90-year-old Bruno. Scott’s son, Michael, helped their older neighbor from his home and into the reservoir, though he wasn’t sure he could survive the dip.

Before the Camp Fire laid waste to the town of Paradise, making the popular retirement community the center of the historic ruin, thousands living reclusively in the thick pines above had lost homes and loved ones.

In the first hours, the residents of remote places like Concow worked arm in arm to limit their losses, and save as many lives as possible.

“Most of the attention has been on Paradise,” said Scott, 51, who has lived in Concow for decades and didn’t want his family’s name used because of the sensitivity of his wife’s job. “We don’t get any attention here. We don’t really want it.”

Around Lake Concow, where recovery teams have been slower to visit the charred remains of horse ranches, organic farms, pot grows and the secluded enclaves of long-distance commuters, the chilly and wind-whipped water became a sanctuary — but a deeply inhospitable one. Especially for Bruno.

As Scott and Michael’s family cat struggled to stay afloat in a tiny cage, Michael noticed a pair of small rowboats chained to a nearby log. He loosened the vessels and helped Bruno, his mother, his brother and the family pets board. Everyone but his dad.

“There wasn’t enough room for all of us,” said Scott, who insisted that the others paddle to safety while he remained submerged.

It was so cold, he said, that at several points he waded back toward the flames to warm up.

Farther north on the lake, Scott’s in-laws were among an estimated 15 people standing shoulder-deep in water. Some of their abandoned cars, which included an old Dodge truck, a minivan and a Kia SUV, remained on Hoffman Road on the north side of the reservoir Tuesday.

Cal Fire Division Chief Garrett Sjolund, who is based in Butte County, said additional firefighters came to the aid of the fleeing residents, handing out fire shelters, the pop-up tents that serve as a last defense against life-threatening heat, to those that couldn’t withstand the water.

“It was a true rescue story,” Sjolund said.

At some point, Michael navigated his crew to an island in the middle of the reservoir. They were safe from the flames, but the frigid water left Bruno drifting in and out of consciousness and suffering severe hypothermia. Michael proceeded back into the water and then onto shore to find help.

“Somebody knocked on my door and said there was an old man on the island,” said Concow resident Peggy Moak, whose house was one of the few that survived the fire as hundreds of others around her were reduced to ash.

Moak said some friends and family threw a canoe into the back of a truck and headed to the lake. They were back in no time, having collected Bruno and the rest of the family.

“The man was fully clothed, too, all his jeans and shoes,” Moak remembered. “He looked like he wasn’t going to last much longer.”

She and others stripped Bruno of his garb and warmed him with a hot bath, tea and fresh clothes, and he appeared to liven up, Moak said. He was later driven to a hospital in Chico. His condition Tuesday was not known.

Authorities confirmed that several of the others in the reservoir were hospitalized, some with serious burns. Their status was not clear either.

Scott remained in the lake until the fire ran its course. When he finally returned to shore, he was virtually unharmed.

Troy Miller, who lives nearby, had heard the stories of neighbor helping neighbor and had, in fact, gotten a hand from some friends after his home was leveled by the fire.