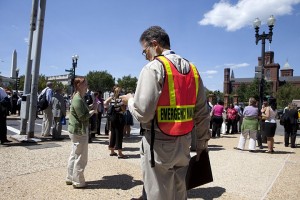 The earthquake that struck Virginia on Tuesday, Aug. 23, and was felt from New York City to the Carolinas, was followed by cellular network congestion — thus spurring officials to call for a national broadband network dedicated to public safety.

Cellular networks appeared to be intact, but congested due to higher than normal call volume, said CTIA-The Wireless Association, an industry group representing wireless carriers, in a statement. It added, “In these high-volume instances, there can be delays.”

The U.S. Department of Homeland Security issued a statement asking members of the public to use text messages and e-mail for communications, except in emergencies, so first responders could continue to respond to 911 calls. Public safety answering points were jammed with callers seeking information about friends or relatives, according to The Washington Post.

“I think this validates the need for a public safety broadband network,” said Charles Werner, fire chief for Charlottesville, Va. “I think in a number of cases, we would have been able to control different ways to communicate such that we could have throttled down or knocked off other non-public safety people during the process to make sure that we had a certain minimal number of voice communications.”

While Charlottesville uses a land mobile radio network for communication between first responders, cell phones were used to coordinate the response with non-public safety partners, such as public works. “Normal conversations that we might have between even internal departments became somewhat problematic, because we didn’t have the capacity to have those communications,” Werner said.

Due to network congestion, city employees resorted to text messages and e-mail to coordinate these activities.

Charlottesville’s 911 call center experienced an outage that lasted as long as an hour. Werner suspected it was due to general congestion of the public telephone network. However, the fire department’s land mobile radio network wasn’t affected.

Administrative and command staff at the Washington, D.C., Fire Department had difficulty communicating via cell phones but were able to communicate using land lines and land mobile radios, said Peter Piringer, a department spokesman. “Cell phones are used primarily for administrative and convenience, and not necessarily part of the incident communication structure,” Piringer said. “What we did [Tuesday] was utilize some of the talk groups that we have available between the different divisions in the command post we had set up at various locations.”

Maj. Erroll George, a spokesman for Prince George’s County, Md., fire and emergency medical services, said the department received a high volume of 911 calls, but did not experience any problems with radio communication. “As far as I know, none of our communications went down,” said George. “And that would include our computer software and those types of things.”

The Capitol sustained light damage, Capitol Police spokeswoman Sgt. Kimberly Schneider told The Hill a few hours after the quake. Schneider said the earthquake did not cause communications problems for responding personnel .

Public safety advocates pointed to the cellular network congestion as an argument in favor of building a national broadband network for public safety. Many industry groups, including the Public Safety Alliance, a partnership of first responder associations, support reallocating 10 MHz of spectrum — dubbed the “D-Block” — for public safety.

“Those in Congress and those who oppose public safety’s position on D-Block allocation and the public safety broadband network are suggesting and have continued to suggest that public safety can roam onto commercial networks during these emergencies for data, for video, for pictures, for those kind of requirements,” said Sean Kirkendall, a spokesman for the Public Safety Alliance. “None of those capabilities would have been available because the commercial networks were unavailable.”

Kirkendall said a number of organizations, including the International Association of Fire Chiefs and FCC, planned surveys of emergency communications following the quake.

“We are very concerned by incidents where emergency wireless calls to 911 after [Tuesday’s] earthquake were hampered by network congestion,” FCC Public Safety and Homeland Security Bureau Chief Jamie Barnett said in a statement. “Thankfully there have been no reports thus far about serious injuries or lives lost.”

Barnett added that the FCC is in contact with wireless carriers and 911 call centers located in the affected areas to identify and address the cause of the outages.

Public safety interoperability has been a hot topic since the problem was highlighted during the 9/11 terrorist attacks. Pieces of legislation have been introduced to help with the creation of a national broadband network and many hope the 10-year anniversary of the attacks will bring the issue back into the national spotlight.