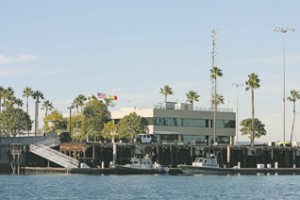 The newly constructed Port of Los Angeles Maritime Law Enforcement Training Center was put to use earlier this month for new inter-agency training sessions for California police and fire departments. The program, which featured three days of training, started July 6 and concentrated on basic boat handling and seamanship skills for first-responders in a maritime environment.

“We had students from various fire departments and lifeguard units from as far north as Santa Venitia (20 miles north of San Francisco) down to Oceanside,” said Los Angeles Port Police Bureau Chief Paul Lipscomb. “They learned docking techniques, towing, knot-tying and how to board vessels in distress.”

Prior to coming on as Port Police bureau chief, Lipscomb, who is also the administrator for the inter-agency training program, noticed during his time on Special Forces that many agencies that operate near bodies of water lacked the proper training for maritime law enforcement.

“That was one of the reasons the Port of Los Angeles Maritime Law Enforcement Training Center was developed,” Lipscomb said.

The port’s Maritime Law Enforcement Training Center opened April 25 when Department of Homeland Security Secretary Janet Napolitano and Los Angeles Mayor Antonio Villaraigosa came to San Pedro to participate in the opening of the program. Since then, Lipscomb said there has been a steady stream of interest from both local and national law enforcement agencies interested in the classes offered.

With port security and maritime border protection becoming more and more of a factor for homeland security and law enforcement teams, the program teaches officers proper boarding techniques, and how to search a vessel, carry out legal arrests on the water, read charts and steer ships into port.

“The MLETC has the ability to offer basic courses to advanced courses for all maritime activity, and we are looking to offer them to not just California law enforcement, but to a national level,” Lipscomb said. “We looked to form a partnership with FLETC because they have been offering a program, but only on a federal level.

“They teach them to ride horses and fly helicopters — but during my time working with Special Forces, we found that there was a lack in proper training for maritime law enforcement activity,” Lipscomb added. “We were not giving them the core competency to complete some of the basic maritime services, and the Port of Los Angeles’ MLETC was developed to help that situation.”

The center cost $16.1 million to complete and was funded by state and federal grants. The facility is equipped with classrooms, a helicopter landing pad and floating docks.

“To keep the Port of Los Angeles safe, we must invest in our personnel and provide them with the latest training, tactics and procedures to be on alert for any signs of potential terrorism,” said Mayor Villaraigosa at the April 25 opening ceremony. “The Maritime Law Enforcement Center will equip our state and local police with the knowledge and skills they need to perform their duties, to keep our port secure.”

Secretary Napolitano and Mayor Villaraigosa also announced the expansion of the Department of Homeland Security’s “If You See Something, Say Something” campaign at the Port of Los Angeles.

The campaign was launched in 2010 by Secretary Napolitano to bring public awareness to the issue of pubic safety — encouraging citizens, travelers, businesses, community organizations and public and private sector employees to remain alert and play an active role in reporting suspicious activity.

This article first appeared in the August 2011 issue of The Log Newspaper.