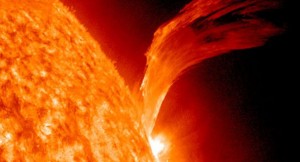 Energy released from solar plasma blasts will reach Earth throughout Friday and Saturday, potentially disrupting communications and electrical grids, according to the National Oceanic and Atmospheric Administration.

The explosion on the sun’s surface could affect precision satellite systems such as GPS and high-frequency radio waves, which airlines use for communication.

Friday’s explosion is second of three recent blasts on the sun’s surface directed toward the Earth. The experts said the current wave could go on until Saturday night at the latest.

“You can think of them as sort of tsunamis in space,” said SWPC Director Tom Bogdan. “The first one was fairly weak, and we’re now seeing the next one coming in.”

However, Bogdan said these effects will be more potent throughout the next few years, adding that Friday’s storm is a “two or three out of five” in terms of its potential impact. This kind of activity will increase in frequency, he said, peaking sometime around 2013.

“Space weather really is everybody’s business, and the sun has an activity cycle very much like the hurricane season,” Bogdan said. “The sun’s season is about 12 years long, and we’re just coming up to the next maximum in solar activity, so we expect to be seeing more of these storms coming from the sun over the next three to five years.”

Magnetic disruptions also have the potential to affect electrical grids. However, Kunches added that power grid managers have anticipated this wave, using tools such as resistors and capacitors to prepare for the impact of a solar explosion.

The potential impact of such storms is historically severe, Bogdan said, citing telegraph stations that reportedly burned down in a record storm in 1859.

Moreover, Bogdan said the increasing frequency of solar storms could induce an aurora visible in the mainland United States if the current wave is strong enough. He said that during the record 1859 storm, an aurora was seen as far south as Havana, Cuba, and Brisbane, Australia.