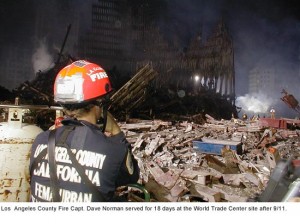 In the nightmarish days after the attacks of September 11, 2001, with fears running high of another strike on the way, L.A. County Fire Department’s elite urban search and rescue team remained in place—first in line to respond here if the West Coast was next.

But some of its members, called up by FEMA and working on their own time, traveled east to lend a hand at the World Trade Center and Pentagon sites. In the 10 years since, their experiences in those dark days and nights have stayed with them and, in some ways, shape their world view today.

Captain Dave Norman, chosen to help oversee night rescue operations at the World Trade Center site, traveled to New York three days after the attacks. “It was complete chaos: thousands of people, bucket brigades, crane operations going on, a mass of humanity throughout this 16-acre collapse site,” he recalled.

His first night on the job—one of18 he spent at the site—Norman saw one of the rescuers emerging from the rubble with a New York fire department helmet in his hand.

“Coming out of the void, all he had in his hand was that helmet with a No. 1 on it. A very powerful moment, if you will.”

Norman, who works on one of the county’s two Urban Search and Rescue teams,Task Force 103 based in Pico Rivera, said it is hard to convey the full force of what went on in New York. “You really can’t explain it,” he said.

But he knows his 9/11 experiences, along with his wife’s recent bout with cancer, have changed how he looks at things.

“It’s a reminder of how lucky we are to be alive, contributing and having a purpose, not only in your professional life but in your personal life and your relationships. Are you contributing enough? Being the best person you can be? These were just ordinary people, heading to work. Just like that, the world changed.”

One of Norman’s colleagues, Battalion Chief Larry Collins, also got the call to head east after the attacks. He recently reflected on it all in an article he wrote for the firefighter publication “Straight Streams.”

“Those of us who responded from the West Coast saw first-hand what a catastrophic terrorist attack looks like, and we’re forever reminded that it can happen again anywhere in our nation,” he wrote.

For Collins, the losses that day were as much personal as professional: Ray Downey, the New York fire department deputy chief with whom he’d long taught rescue operations classes, was among the hundreds of FDNY firefighters killed that day in the towers.

Had New York been spared, Downey almost certainly would have reported to the Pentagon, helping to lead the search and rescue response there. As it was, that role fell to a national cadre of experts, including Collins, who remembers saying goodbye to his New York colleague in July, 2001, after a class they’d taught in Baltimore, with their profession’s trademark sign-off, “See you on the big one.”

They jokingly agreed that was likelier to be in L.A. than New York. “It turned out both of us were wrong,” Collins wrote, “because three months later L.A. County and L.A. City firefighters were in New York digging for survivors in the wreckage of the World Trade Center.”

Collins, whose recent deployments include the earthquake and tsunami in Japan and Hurricane Irene on the East Coast, was a captain when he headed to the Pentagon shortly after the attacks, helping to supervise night operations at the site. Since promoted to battalion chief, he now oversees stations in the unincorporated areas of Florence-Firestone, Willowbrook, and the cities of Huntington Park, Lynwood, South Gate, and Cudahy, while also serving as a task force leader of the department’s urban search and rescue team.

The expertise garnered after 9/11 in Washington, D.C. and New York, and at disaster hot spots around the world, has made L.A. County a safer place—even though most folks on the street might not be aware of it, he said.

“Those people on the fire truck are often some of the most experienced rescuers in the world,” he said. When catastrophe strikes, “you want people who have seen maybe even bigger things than that, and have done it over and over again.”

And, as Collins prepared to head to New York for 9/11 observances this weekend, he made it clear that the search and rescue wisdom of Ray Downey and his New York team didn’t die with them in the towers that day. He said those FDNY colleagues were instrumental in helping L.A. County build its own urban search and rescue team—a legacy of shared knowledge, and of pulling together in a crisis, that continues to this day.

“They helped us immensely,” Collins said, “and that’s the power of sharing that goes on.”