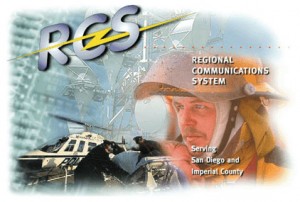 A portion of the “north loop” of San Diego County’s Regional Communications System (RCS) experienced a major failure when the county-wide power outage hit on September 8, 2011. This was the second major outage for the redundant 800 MHz RCS that was designed to carry public safety communications without the need for a backup system.

Various sources at North County Fire Protection District indicate that their communications were severely disrupted by the power outage. Some units were able to hear and not talk to dispatch while the opposite happened to some other units. Others indicated that the system went into formal failure mode. One official put it bluntly: “The system crashed, again.”

Fortunately, a ham radio operator who foresaw the folly of putting all public safety communications eggs in one 800 MHz basket had assembled a plain-Jane public safety VHF repeater system on a shoestring budget over the years. Hams are good at doing that. The system was pressed into action on September 8 and carried a heavy dispatch load.

Many cities and communities in North San Diego County had abandoned and dismantled their 150 and 450 MHz communications systems when they switched over to the 800 MHz RCS trunker years ago. Fortunately, North County Fire (aka Fallbrook Fire) and (reportedly) Oceanside Fire kept their VHF frequencies alive — and that saved the day on September 8.

San Diego County’s lessons serve as valuable reminders for other communities: Murphy lives. There is nothing like having an independent backup radio system in place — one that is tested regularly and ready to fill any communications void. Hopefully North County’s VHF repeater system will be rebuilt with first class equipment and expanded into other areas. It has proven its worth.

As for the RCS system, people will be asking lots of questions including why one power generator overheated and shut down, and why another generator was never installed in the first place (answer: that particular RCS relay station was installed at an electrical power plant that had plenty of operating generators — until the unthinkable happened).

Fortunately, the San Diego County RCS has a number of well qualified engineers and technicians who will be working hard on diagnostics, repairs and long-term solutions.

From the CGC Communicator #1088