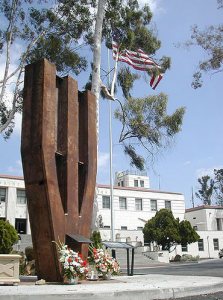 We would like to inform you that the public and press are cordially invited to join Fire Department, Law Enforcement and Military agencies for a “9/11 Remembrance Ceremony” dedicated to those who perished on September 11, 2001.

This location is especially noteworthy due to the presence of two memorials dedicated to the events of September 11, 2001.

The second memorial is located in the lobby of our training center and is titled “Towering Memories.” The “Towering Memories” memorial consists of two shapes similar to the silhouette of the Twin Towers that comprised the World Trade Center. Included on the memorial is a list of names of those who lost their lives at the World Trade Center, the Pentagon and the Pennsylvania plane crash site.

“Serving with Courage, Integrity and Pride”