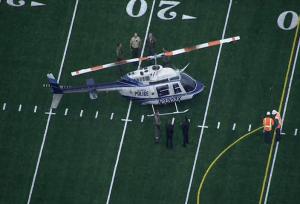 Officials are investigating why a Los Angeles police helicopter had to make an emergency landing in Woodland Hills on Monday afternoon.

The helicopter landed shortly before 2 p.m., touching down at Pierce College.

Although police officials didn’t name the exact location, it appears in a photo from KCBS-TV that it landed on the school’s football field.

Although there had been inclement weather in the area, officials were uncertain if that was the reason the pilot landed the helicopter.

No officers were injured in the landing.