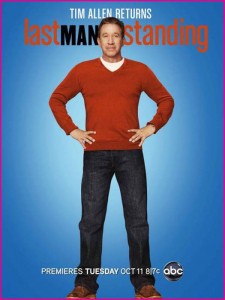 Tim Allen — star of Home Improvement, Toy Story, The Santa Clause and Galaxy Quest, just to name a few — stars in Last Man Standing, an ABC comedy airing at 8 PM (EST) on Tuesday nights. Allen plays Mike Baxter, KA0XTT, a married father of three and the director of marketing at an outdoor sporting goods store in Colorado whose life is dominated by women. While Amateur Radio has not been prominently featured in the first episodes, according to John Amodeo, NN6JA — the producer of Last Man Standing — it is a part of the show and an important part of Mike’s character. The episode that will establish Mike as a radio amateur is currently scheduled to air in mid-January.

“Tim’s character Mike is involved in creating the sales strategy for the store, including their catalog and Internet identity,” Amodeo told the ARRL. “The store is like Bass Pro Shops or Cabelas. There is a strong self-sufficiency overtone to Mike’s approach to life. Ham radio fits in the story as a means of emergency communication. It’s not directly featured in the foreground story, but at the moment, it’s a background element on the home set. Once I allow something to be put on the set, there’s a chance the writers will feature it. Now that we have actually established Mike Baxter as KA0XTT, we can do more things featuring Amateur Radio.”

To make Mike a ham, Amodeo needed Mike to have a call sign. So he contacted ARRL Media and Public Relations Manager Allen Pitts, W1AGP, to help him out. “In film and TV, we create fictitious telephone numbers, addresses and brands,” Amodeo explained. “We do this mostly to avoid being sued by real brands and to avoid complications with advertisers. As a producer and a ham, I was torn between wanting the show to be accurate and needing to keep my studios out of trouble. An accurate and positive portrayal of ham radio on TV would be a good thing.” Many TV shows and movies use telephone numbers with a 555 exchange (such as 555-1212), as that exchange is not valid. 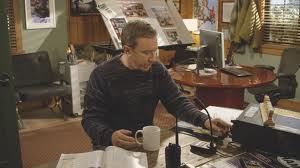 Together with Pitts, and with input from Tim Allen, Amodeo created a call sign for Mike Baxter: KA0XTT. Since the show is set in Colorado, they wanted Mike to have a call sign with a 0 in it. “We wanted a call sign that sounded real, but was not valid,” Amodeo said. “The call sign is a 2×3 format with an X suffix. A call sign in this format is an experimental call sign and is not assignable to a radio amateur except in special circumstances. We especially liked the suffix, as it is a play on Tim’s character from his former show, Home Improvement: ‘ex-Tim Taylor.’”

Amodeo told the ARRL that both his studio (Fox) and ABC were “delighted to have a useable call sign. In the past, TV shows just made up some crazy call or used someone else’s without permission. And because we’ve had so much talk about Amateur Radio here on the show, a few of my production assistants took their Technician exam.” Amodeo applied to be an ARRL Volunteer Examiner so he could help administer the exams. On October 6, Amodeo and two other ARRL VEs administered the Technician exam to seven prospective hams. All seven passed, with two making perfect scores. 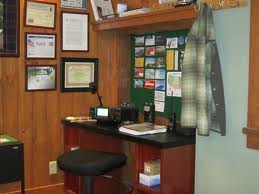 Since Mike Baxter is a ham, he needed a shack. So Amodeo and the set designers installed an Amateur Radio station in the corner of Mike’s set office. Allen, as Baxter, uses an ICOM IC-9100 HF/6 meter/2 meter transceiver and an IC-92AD handheld transceiver, both provided to the show courtesy of ICOM America. Amodeo told the ARRL that he has plans to add vintage equipment to the shack in the future. “The radio equipment was originally intended to be used as props and set dressing items,” Amodeo told the ARRL. “But since eight of the show’s staff members are radio amateurs, it didn’t take long before we made the radio equipment ‘practical,’ which is to say, actually capable of making radio calls live from the stage when we’re not shooting.” He said that radios will always be on and lit whenever they are shooting scenes in the office.

Pitts and ARRL News Editor S. Khrystyne Keane, K1SFA, have been working with Amodeo to make sure that Amateur Radio is correctly portrayed in the show. Keane also provided ARRL and Amateur Radio-related materials that are used on the set, such as issues of QST, NCJ and QEX, as well as a call sign map, a 2012 ARRL Handbook, a 2012 ARRL calendar and various ARRL stickers (look for one on the HF rig). “We also sent fake versions of DXCC, Worked All States and Worked All Continents certificates, as well as a Morse Code Proficiency Certificate,” Keane explained. “Each certificate bears the name Mike Baxter and has KA0XTT as the call sign. All the certificates have issue dates of December 25, playing upon Tim Allen’s role in The Santa Clause movie series.”

Amodeo told the ARRL that he also installed antennas (courtesy of NCG/Comet) — a dipole and antennas for 2 meters and 70 cm, “up high, about 50 feet, inside the sound stage. The ultimate goal is to have the hams on our staff make contacts from our stage during down times.”