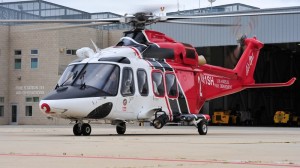 The Los Angeles Fire Department (LAFD) has taken delivery of its third AgustaWestland AW-139 helicopter. After a cross county flight from the AgustaWestland plant in Philadelphia, Pa, the aircraft, “Fire 2,” will give the LAFD additional firefighting and rescue capability.

The new aircraft was delivered with an EMS-equipped cabin, Goodrich external hoists and specialized rescue gear.

All three of the department’s AW-139s are due to receive additional capacity Simplex water tanks in the near future.

The AW-139s are used for firefighting , air ambulance and hoist rescues operations in the mountains , rivers and harbor of Los Angeles. The aircraft also fulfill other roles for the fire department, such as providing an observation platform during large structure fires, or as support during large natural disasters such as earthquakes or flooding.

We’re happy to have this third aircraft as we come up on our fire season,” a LAFD pilot told Vertical. “The AW-139 is a stable rescue platform and has plenty of power.It has a large cabin and storage area that works great for our rescue crews. With the larger water tank, it should give us a bit more firefighting capability.”