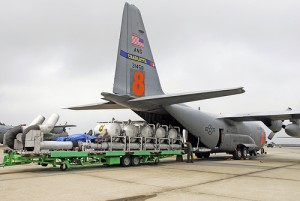 The highly specialized, critical training requires sighting and flying with a Forest Service lead aircraft, flying at the required low altitudes to make the drops effective and dropping water or retardant on a specific area. And, upon return of the aircraft, Forest Service crews receive practice in the quick turn of reloading the MAFFS units.

“These are really experienced pilots, many with thousands of flying hours. But this isn’t the typical mission they’ve flown throughout their careers. They really need to practice and re-certify every year,” said Lt. Col. David Condit, Air Force Reserve chief of aerial firefighting and 731st Airlift Squadron C-130 instructor and evaluator navigator.

“The MAFFS are important because they provide a surge capability that can be used to boost wildfire suppression efforts when commercial airtankers are fully committed or not readily available,” said Tom Harbour, director of Fire and Aviation Management for the Forest Service.