Up All Night, Scanning for Breaking News 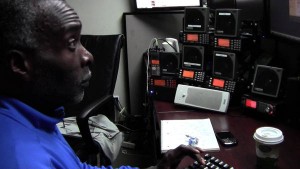 From where James Crockman sits, New York City is a nonstop flurry of fires, murders and mayhem.

Mr. Crockman, 52, is the weekend overnight man at Breaking News Network, a service that culls news reports from fire and police radios and sends them as alerts to news media outlets and other subscribers. A former warehouse worker, he commutes to BNN’s headquarters in Fort Lee from the Trenton area. From the office, it can be a five-minute drive over the George Washington Bridge to Manhattan, but Mr. Crockman has never made that drive. His New York is a virtual one, created by the crackling chatter of fire and police commanders and 911 operators giving a never-ending narrative of mishaps.

“If I visited New York, all I’d know about the city is ‘This is where such-and-such homicide happened,’ or ‘That’s where that deadly fire occurred,’ stuff like that — a breaking-news perspective,” he said last weekend during one of his 14-hour overnight shifts at the news desk.

But oddly, Mr. Crockman knows the city in a way that few New Yorkers do.

Mr. Crockman works four long overnight shifts, including on the weekends, and he seems born for the job. “Listening to the scanners was always my escape,” said Mr. Crockman, who has not married. For years he called in tips to BNN until the company hired him six years ago to work weekend nights, a peak time for crime in New York, which makes Mr. Crockman a main gatekeeper for the flow of so-called spot news in New York.

“When I first realized these media outlets are relying on me, I would get nervous,” he said. “Now, I can almost do this in my sleep.”

He has proved to be something of a human antenna, capable of picking out newsworthy items from a sea of static emanating from the bank of 17 scanners on the desk, all tuned to radio frequencies used by emergency responders in New York City and beyond, not to mention several more Internet scanner feeds and the running computer chat that Mr. Crockman monitors with hundreds of regular tipsters, who are mostly police and fire buffs listening to scanners at home.

“Hey Kev U on?” Mr. Crockman typed into the chat discussion, hoping to reach a certain fire chief. He picked up the ringing phone and spoke quickly and familiarly to another tipster: “Oh, was he D.O.A.? What hospital — do you know? O.K., thanks man.”

Sifting through the numerical codes and jargon, he discarded the merely mundane mayhem. Every few minutes, he typed up a short bulletin of an episode, including the address and a description, and sent it out. There was the teenage boy who fell into the Harlem River and drowned, and the 4-year-old struck by a car in Hoboken, N.J.

Mr. Crockman was able to pick out snippets of clipped speech from a soup of scratchy conversations, the way a gifted conductor might hear an individual violinist amid the entire orchestra.

“He can sit there listening to 20 sources of sound, and he can discern from all that noise the newsworthy items,” Mr. Gessman said. “Not everything you hear on the scanner makes the news, but James has a good nose for what will.”

While immersed in conversation, Mr. Crockman suddenly cocked his head, reached over and turned up one scanner. Out came a thick New York accent mentioning a “10-75.” Mr. Crockman said he knew instantly that the gruff voice belonged to a certain Brooklyn fire commander who was describing a “working fire” on the second floor of a three-story brownstone on Sterling Place in Brooklyn.

Mr. Crockman said he could identify hundreds of commanders and dispatchers simply by their voices, which enables him to know the borough, and sometimes the neighborhood, of the emergency without having to consult scanner channels. The sirens from the Brooklyn fire could be heard through the speakers, as Mr. Crockman put out a bulletin; he then updated it when the blaze went “all hands.”

After being quizzed about a list of New York City streets and correctly providing the police and fire commands for them, he grew sheepish, gave a chuckle and said, “I guess I’ve been doing this too long.”

But then something in the scanner-squawk caught his ear, and without missing a beat, he said, “Ah, we got a fire in Paterson.”