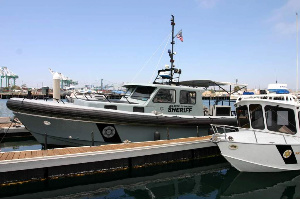 The Los Angeles County Sheriff’s Department Ocean Rescue Boat program began service in August 2007 and has proven its worth as a program with very unique tactical capabilities.

The Ocean Rescue program is operated by the Special Enforcement Bureau’s Emergency Services Detail. These deputies are all trained Special Weapon Team members, divers and paramedics.

The program was designed to provide a maritime LASD homeland security presence covering the 80 miles of Los Angeles County coast and the over 800 square miles of open ocean within Los Angeles County, including the islands of Catalina and San Clemente. The homeland security boat is also capable of providing emergency medical services and conducting disaster, chemical/biological detection and mitigation and dive operations.

The homeland security boat was constructed from the ground up to suit LASD’s homeland security requirements. It is a one of a kind vessel, built to stringent United States Navy specifications. It was built with high tech measures that make it flame and projectile resistant and is equipped with a crew served weapon system. It is fitted with an air collar that functions as a bumper system for ship boarding operations and also serves as an emergency flotation system if the hull is breached.

The boat has a range of several hundred miles and has the capability of staying on scene at an incident for up to one week. It generates its own electricity, has cooking, fresh water and refrigeration capabilities in addition to sleeping quarters. Another unique aspect of the boat is that it is a Los Angeles County Department of Health Services certified Advanced Life Support ambulance. As such, it has the equipment available for the crew to provide medical treatment ranging from minor injuries to severe cardiac and/or trauma injuries. The boat is equipped to transport injured persons in a climate-controlled environment.

The homeland security boat is designed as a dive platform, capable of supporting up to 15 divers. It has a large dive tank storage capacity and a hot and cold water decontamination system that can be used for divers or accident victims exiting contaminated waters. The boat supports surface supplied hard hat diving and sonar scanning to help locate victims or objects under water. The boat has the capability to cruise at speeds up to 40 knots and can respond to all areas within Los Angeles County.

Various intelligence agencies have indicated that the Los Angeles and Long Beach port area is a prime terrorist target. It is the largest port area in the United States and is surrounded by heavily populated areas. In addition to the human toll that a port incident could cause, it is estimated that a terrorist incident occurring at the entrance to the port or in the port itself, would cost the United States economy one billion dollars a day.

Designated high interest vessels are identified for pre-port entry searches in county waters outside of the port. A joint boarding team consisting of LASD Special Enforcement Bureau Emergency Services Detail, Arson/Explosive canine detail, HAZMAT detail and Coast Guard members are transported via the Los Angeles County Sheriff’s Department Ocean Rescue boat. The high interest vessel is intercepted outside of the port in the area of the Los Angeles County ship anchorage area. The LASD boat crew notifies the high interest vessel via marine radio of their intent to board the ship. The joint boarding team then boards the ship.

The boarding team detains the ship’s crew and inspects passports and shipping documentation. Using sophisticated radiation detection equipment and trained explosive dogs, Los Angeles County Sheriff’s Department personnel check the ship for conventional and “dirty” bombs. Detection equipment is carried in backpacks and is set up to detect two types of radiation: neutron and gamma. Neutron radiation is indicative of nuclear bomb grade materials. Gamma rays are put out by a variety of isotopes. Dirty bombs would use isotopes that disperse gamma radiation.

These packs are the same packs used by Department Of Defense Special Operations personnel to search out and detect illicit radiation. The packs work well searching containers and large areas. They are sensitive enough to overcome the shielding of the metal containers.

Emergency Services Detail divers will also periodically conduct hull searches. The ship is then cleared to continue into the port where additional security measures are in place and enforced by the U.S. Coast Guard, L.A. Port Police and Long Beach Police.