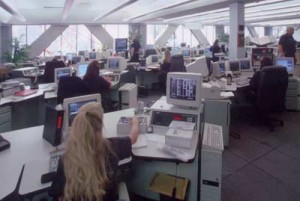 Los Angeles County last week announced that it has signed a $12.5 million contract to have Raytheon replace its aging dispatch consoles with twin-screen equipment that is expected to enhance fire and sheriff dispatchers’ ability to quickly make the most-effective resource decisions and improve interoperability.

This upgrade to LA County’s dispatch consoles has been needed for some time, said Bob Sedita, a member of the customer-advocacy group for Raytheon’s public-safety and security business who used to work with the Los Angeles County Sheriff’s Department.

“Both the fire department and the sheriff’s department in LA County have been using dispatch consoles that are somewhat aged — some components of the dispatch system go all the way back to the late 1980s, with the original system,” Sedita said. “So, some of the stuff is really old and hard to repair, or even service.

“With the technology that Raytheon brings forward … the public-safety dispatchers are going to have a lot more capability at their fingertips. They’ll have the ability to basically ‘click on’ communications with other dispatch centers. It will be a much more enhanced, robust dispatch system than they have now.”

This interoperability capability is a key benefit to the dispatch-system upgrade, according to Scott Edson, commander of Los Angeles County Sheriff’s Department communications and fleet management bureau.

“These radio consoles are the first step in improving interoperability throughout the region,” Edson said in a prepared statement. “They allow our public-response dispatchers to more efficiently serve the deputies in the field, including ‘patching’ other radio systems together in a time of need.”

As part of the upgrade, Raytheon will provide new hardware and software, and some dispatch stations, Sedita said. The new equipment will be interfaced with the legacy computer-aided dispatch system, but it is P25-compliant and will work with LTE applications in the future, he said.