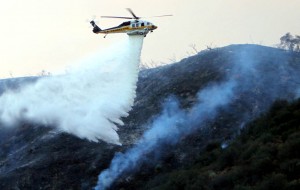 Fire crews continue to battle a wildfire in the Angeles National Forest along the East Fork of the San Gabriel River north of Azusa.  The blaze was 5 percent contained as of Monday morning.  400 firefighters from multiple agencies along with water dropping helicopters and air tankers dropping fire retardant (including the DC-10) are fighting the flames.

The fire which started about 2:15 PM on Sunday, September 2nd is known as the Williams Fire and has scorched more than 4,000 acres and forced the evacuations of thousands of Labor Day weekend visitors and campers.  Residents from the Camp Williams Resort area which includes a campground, mobile home park and restaurant have also been told to evacuate.

The area where the fire is burning, about 3-1/2 miles east of California 39 along the East Fork of the San Gabriel River, is a popular spot with visitor who often park three-deep off a two lane road a few yards from the stream.  A major undertaking for forest rangers during the early hours of the fire was getting those people out safely.

The Red Cross has established a shelter for those affected by the fire at Glendora High School, located at 1600 East Foothill Blvd in Glendora.

There are no reports of injuries or property damage at this time. No structures are currently threatened as the fire is pushing north in steep terrain toward the Sheep Mountain Wilderness area.  The area has not burned since 2003.

The cause of the fire is unknown but officials are looking into a vehicle that was found burning near the starting part of the fire as the source.

For the latest updates on this fire go to the Incident Information System web page at https://inciweb.org/incident/3230/