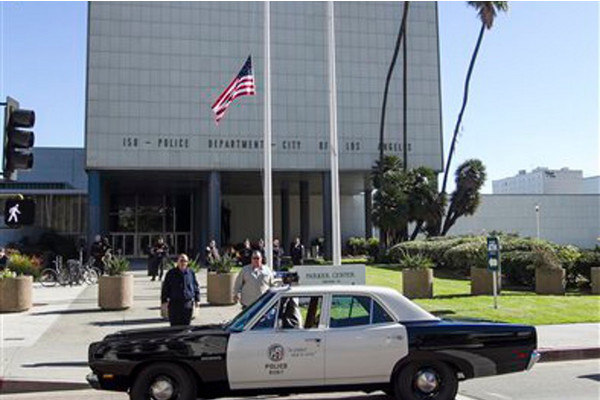 Parker Center, the iconic headquarters of the Los Angeles Police Department for over half a century, has closed its doors for the last time.

Using a chain of handcuffs, LAPD Chief Charlie Beck on Tuesday January 15th locked the doors as several active and retired police officers, some wearing uniforms of years past, looked on. 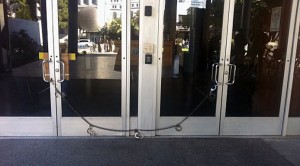 “Some of the brightest days of the LAPD have occurred here, and also some of the darkest,” Beck said.

“It is the history, the ghosts and the glory of Parker Center, that have made us what we are,” he added.

The LAPD began moving out of the antiquated facility at 150 N. Los Angeles Street in 2009, after the opening of its replacement, the modern Police Administration Building at 100 W. First Street. The new PAB with its gleaming facade of glass, cost about $600 million, Beck said.

The Scientific Investigation Division’s Photo Section was the last to leave Parker Center, vacating on Friday January 11th. An environmental impact study is under way to determine the building’s fate.

LAPD Assistant Chief Michel Moore felt nostalgic during Tuesday’s ceremony, which featured an honor guard lowering the flags in front of Parker Center for the last time, as well as an “end of watch broadcast.”

The latter is traditionally done for retiring officers, when their accomplishments are read aloud and broadcast over police radios across the city.

You can listen by clicking the link below.

All units, this is an end of watch broadcast for Parker Center, the former ‘Police Administration Building’, located at 150 North Los Angeles Street, official headquarters of the Los Angeles Police Department for over 50 years.
During more than five decades of operation, the iconic Parker Center came to be one of the most high profile landmarks of Los Angeles, its sleek mid-century exterior known around the world as home to the LAPD. In media and popular culture, the building was featured in countless fictional and non-fictional television series and film projects. It also served as a backdrop for live news broadcasts virtually day and night, instantly recognized as LAPD headquarters by local, national, and international audiences.

Over the years, the men and women of the Los Angeles Police Department came to regard the structure as a time-worn, burnished symbol of the LAPD’s best. In 2009, most of the Department moved to its new headquarters on First Street, just south of City Hall. Now, with the recent departure from Parker Center of the last remaining police personnel, the building is fully vacated and decommissioned as a Department facility.

It all began in December of 1952, when ground was broken for a new headquarters. At the time, the varied units of the LAPD were scattered in makeshift, inadequate office spaces throughout the downtown area. The new building was designed to increase operational efficiency by providing an integrated police headquarters under one roof.

Construction commenced in 1953 with final hand-over of the completed building occurring in 1955. The actual cost of $6 million was $2 million less than originally projected.

Its 398,000-square-foot area was laid out according to function, bringing related police activities together on the same floors. The eight-story building included all administrative offices and staff units, central detectives and patrol divisions, and the Traffic Bureau. The fourth floor comprised one of the nation’s largest and finest crime laboratories. A felony jail housed adult male prisoners in proximity to Detective Bureau, saving many hours in driving time to and from the Main jail. A fully functional public auditorium was included, as was a newly designed police radio and communications center, the Department’s nerve center for all routine communications and civil emergencies.

In 1966, the building was named for the late Police Chief William H. Parker, following his untimely passing from a heart attack.

In October 1971, a Los Angeles Police Memorial was constructed in front of the building to honor officers killed in the line of duty.

Parker Center has served and protected the men and women of the Police Department with distinction for 54 years. Parker Center, on behalf of Chief Charlie Beck and all LAPD personnel, thank you for your steadfast service through more than half a century of the best and worst times in Los Angeles. You are now end of watch.

Source: Via the LAPD news blog and https://www.dailynews.com