U.K. Looks To 1950s Technology for GPS Fall Back 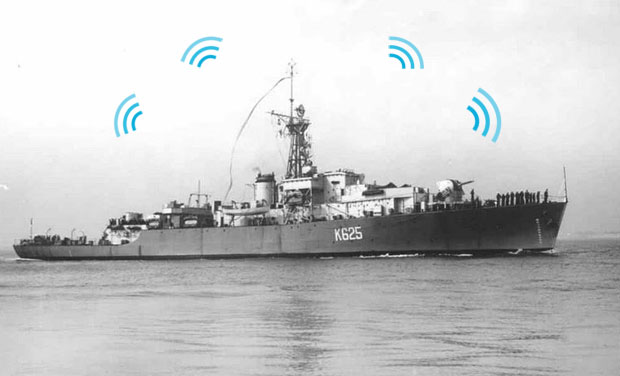 A technology that dates back to the 1950s is being trialed in the world’s busiest shipping lanes to provide highly-accurate navigation that is not dependent on the weak, and easily jammed, satellite signals.

Called eLoran, the system uses high-power, low-frequency, radio transmitters, nine of them across Europe, to provide a location signal. The system has just gone live in Dover under the General Lighthouse Authorities (GLA) of the U.K. and Ireland, the body that has to provide navigation aides around the British Isles.

The original Loran technology dates back to a U.S. program in the 1950s to provide navigation for shipping. It was used by the British Royal Navy and the U.S. Navy.

Why the need for another system? A recent report showed just how dependent much modern infrastructure is on the GPS signal; not just for location, but it also because it has a highly accurate time signal. The problem is that GPS, by a considerable margin, is one of the weakest broadcast radio signals — too weak to penetrate most buildings. This makes it very easy to jam.

How weak? “Think of it this way; imagine trying to see a candle in New York with a telescope in London,” said Dr. Martyn Thomas of the U.K.’s Royal Academy of Engineering.

Paul Williams, Principal Development Engineer at the GLA, said that in a trial using a radio jammer with just 1.5W of power, they were able to jam the GPS signal over a range of 30 kilometers. “If that was on the White Cliffs of Dover it would jam the entire straights. You could hide that ‘jammer’ easily in a bush.”

Loran works in much the same way as GPS, measuring the time it takes for a signal to travel from a known transmitter to your receiver. GPS transmitters are mounted on satellites, Loran transmitters are big radio towers that pump out a signal with a range of up to 900 miles.

To get a location from Loran you need at least three signals. If you know the exact distance to the transmitters, and you know exactly where they are, through a process called trilateration you can work out where you are. The more signals you can detect, the more secure your position. There are nine Loran transmitters in Europe in Norway, France, the U.K., and the Faroe Islands.

“All Loran transmitters broadcast a series of pulses at 100KHz; they are the same from every transmitter, it is just that they take turns in transmitting. That time of transmission is known about.”

Mr. Williams said using just the towers on their own gives a location accurate to about 100 meters. The system being deployed by the GLA is the latest version of the technology, called enhanced Loran, or eLoran. An additional signal broadcast only from Dover now, but as the system is rolled out, covering firstly the entire east coast of the U.K., and later the whole British Isles, gives the system 10m accuracy, comparable to GPS.