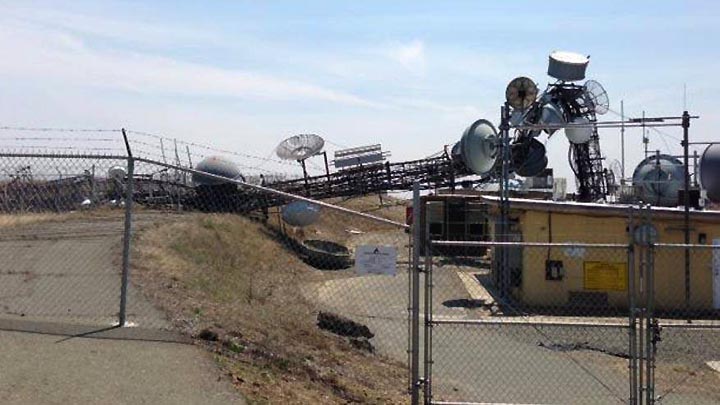 Authorities suspect that vandals late on July 28 or early on July 29 cut several guy wires supporting the Rocky Ridge radio tower in the hills of the Las Trampas Regional Wilderness above San Ramon and Danville, causing the 200 foot structure to topple.

“The Rocky Ridge Tower has been a key communications tower for amateur, commercial, and public safety radio operators, alike,” says Jim Siemons, AF6PU. “This was an important communications hub in the Contra Costa and Alameda counties’ East Bay Regional Communications System Authority. (EBRSCA) group that is just now providing P25 communications to many municipalities and districts within the San Francisco East Bay.”

Siemons says several ham radio groups had repeater equipment on the tower, including his own Mount Diablo Amateur Radio Club. MDARC had a packet/APRS digipeater operating on 144.390 MHz that Siemons says was in constant use up until the tower came down. “There will certainly be challenges with coverage in areas unless or until the tower is replaced in parts of Walnut Creek, Alamo, Danville, Diablo, Blackhawk, San Ramon, Moraga, and Canyon,” Siemons added.

KCBS Radio in San Francisco reported that police were investigating the tower collapse. No injuries occurred, and authorities believe vandalism was the cause. Damage could go as high as $1 million. A Contra Costa County Fire official told the radio station that the tower collapse has affected some dispatch services in the western part of the county, but police say back-up systems headed off any disruptions. According to KCBS, police “are trying to determine why vandals would target the tower, which is located in a remote area of the park behind multiple gates and fences.” — Thanks to Jim Siemons, AF6PU, and KCBS Radio