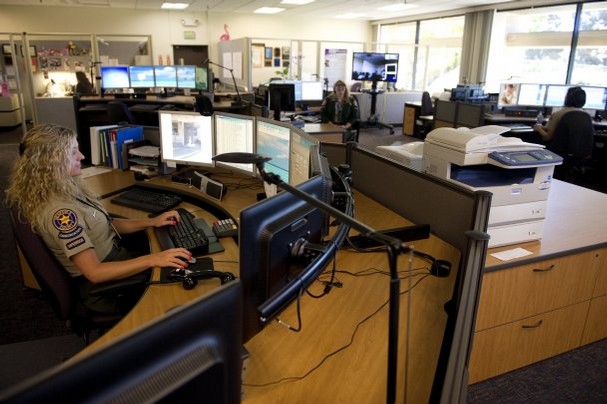 One of Elizabeth Hernandez’s seven computer monitors contains a motto that gets her through the day during her up-to-18-hour shifts as a Ventura County sheriff’s dispatcher:

“Keep calm and dispatch on.”

With the revamping of the sheriff’s communications center, which includes ergonomic chairs and rising desks, that’s become easier.

“There’s definitely a lot more of a comfort level and it feels more welcoming,” said Hernandez, who has worked as a dispatcher for nearly five years. “I like the versatility of it.”

While the communication center moved out of the Ventura County jail basement and into another building at the Government Center in Ventura about seven years ago, the redesign took four years of planning and 20 days to fully execute. It was up and running at the beginning of April.

With funds from the California 911 Emergency Communications Division, Danita Crombach, communications manager for the sheriff’s office, was able to purchase new furniture that allows the workstations to be more spread out, monitors to pull back and forth, and desks to rise so dispatchers can stand.

Each desk has its own fan and lamp so the dispatcher can adjust the ambiance to his or her liking. Crombach said that has reduced light and temperature “wars.”

“I try really hard in maintaining an environment that is conducive to professionalism, efficiency and harmony,” Crombach said. “I’m only happy if (the dispatchers) are happy. This is designed to meet their needs.”

The communication center was one of five chosen across the state to participate in a regionally hosted 911 pilot system that makes geographic diversity possible.

This means dispatchers from the Ventura County Sheriff’s Office and the Oxnard and Simi Valley police departments can log onto any system and still receive their agency’s phone calls in another city in case there is an emergency.

Dispatchers communicate with the public and deputies from east to west county, on calls ranging from a burglary in progress to reported hit and runs. It can get loud and hectic, but the dispatchers remain focused at the tasks at hand, officials said.

The six to seven monitors in front of them allow them to put out messages to deputies and also track where patrol cars are. With the new system, dispatchers can drag their map of ongoing incidents to any screen they like.

Aside from the new chairs that do “like seven different things,” dispatcher Kristin Taylor likes the new phone system that allows her to quickly connect and transfer calls to other agencies. She said it comes in handy during high-stress situations like a car chase or officer-involved shooting.

“In situations like that, we’re calling highway patrol, we’re calling the fire department, so it’s good to have this simple system of calling who you need to in one or two steps,” Taylor said. “Now it’s just boom, boom, boom.”

In addition, the communication center already has equipment that could eventually make text, picture and video 911-communications possible.

The technology will be available once the network and cellphone carriers can provide that kind of service, Crombach said.

“We’re on the cutting edge of next-generation 911,” she said.