As a young EMT on a Jerusalem ambulance, Eli Beer realized that, stuck in brutal urban traffic, they often arrived too late to help. So he organized a group of volunteer EMTs — many on foot — ready to drop everything and dash to save lives in their neighborhood. Today, United Hatzlah uses a smartphone app and a fleet of “ambucycles” to help nearby patients until an ambulance arrives. With an average response time of 3 minutes, last year, they treated 207,000 people in Israel. And the idea is going global.

Below, is a video from the TED conference where Eli Beer talks about the origin of United Hatzolah, how it operates, and how the all-volunteer organization he founded is spreading around the world.  Many videos can be found at https://www.ted.com/.

Locally, Hatzolah, Hebrew for rescue, got its start in Los Angeles in 2001. Its volunteers operate in three neighborhoods of the city with dense populations of Orthodox Jews, although most Angelenos are hardly aware of the group’s existence, a sharp contrast to chapters in and around New York City that are far better established.

“The current status is ‘hot potato,’ ” Hatzolah spokesman David Bacall said of his organization. “That’s the best way that I can describe it.”

On the East Coast, the presence of volunteer ambulance corps is quite common, particularly in smaller towns. Hatzolah’s first chapter was established in Brooklyn in the 1970s; Bacall, a financial adviser originally from New Jersey, had served as a volunteer with a number of different 911-related volunteer corps before moving to Los Angeles with his family four years ago.

In California, however, EMS services are provided primarily by local professionalized fire departments, which maintain exclusive claims to being the sole 911 responders in their particular regions. In the city of Los Angeles, the exclusive responder to emergency calls is the Los Angeles Fire Department (LAFD); in unincorporated sections of Los Angeles County, the county fire department has that privilege.

Under current county law, Hatzolah is prohibited from responding to emergencies, even when the calls come in over the group’s dedicated hotline. In its letters, the DOT has informed the group that to obtain a permit, Hatzolah would first have to agree not to respond to emergencies.

Furthermore, because Los Angeles County Emergency Medical Services Agency (LACEMS) also determines the sums charged by all private ambulances in the county, Hatzolah would be prohibited from providing transport to hospitals free of charge.

Absent those permits, Hatzolah never stopped working, responding to emergency calls and, in some cases, acting as liaison between members of the Jewish community and mostly non-Jewish first responders. Last summer, the group helped rescue two individuals — in one instance working with Los Angeles County Sheriff’s deputies to find a person just minutes before what would have almost certainly been a successful suicide.

Information on Hatzolah of Los Angeles can be found at their web site https://www.hatzolahofla.org/ 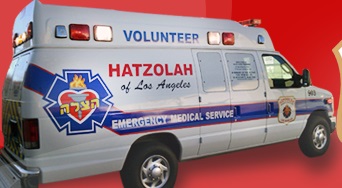