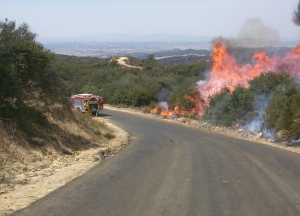 A group of volunteers is watching closely for suspicious behavior and reminding the public about the high fire danger along roadsides in Orange County near wilderness areas and parks.

“Most of the county’s major wildfires have started from a roadside, whether by accident or intentional,  and were caused by people,” said Dave Raetz, who heads up the Fire Watch volunteer program for the Irvine Ranch Conservancy.

Fire Watch volunteers are trained by the Orange County Fire Authority and Irvine Ranch Conservancy to watch for sources of roadside ignitions. Even though the Conservancy manages Fire Watch activities for landowners such as OC Parks and the City of Irvine, volunteers are not posted inside the park areas, but rather along roads.

“Our main goal is to have people standing along the side of the road in areas that have a high risk of ignitions and they’re supposed to intervene in situations that could cause those ignitions,” said Raetz. “And that could be someone that parks their car in tall grass and the catalytic converter could start that grass on fire.”

Raetz explained that volunteer staff locations are selected by the Conservancy based on past fire ignition locations, as well as heightened potential for arson-related activity. Volunteers watch for suspicious behavior, but also inform the public about fire danger.

Members of the public can also help by reporting suspicious or dangerous behavior.

“As soon as the winds pick up, the public should be on high alert,” said Raetz. “Watching for seemingly little things like a cigarette thrown out the window or a car pulled over onto dry weeds can help prevent a wildfire.”

The National Interagency Fire Center has predicted “above normal” significant wildfire potential to persist in Southern California mountain areas through at least October.

Raetz said the dry conditions in Orange County’s wilderness areas are especially ripe for wildfires.  Much of the 20,000 acres within the Irvine Ranch Open Space is covered with coastal sage scrub and chaparral.

“The threat of fire and spread of fire is especially high right now due to the tinder, dry conditions in Orange County – and the Santa Ana wind conditions are on the way too,” said Raetz. “The idea is to pay attention to those conditions and be especially vigilant to prevent catastrophic wildfires.”

Southern California  has already experienced major fires in 2013 from Ventura to Riverside County. The Rim Fire in Northern California is just one of several large wildfires that crews have struggled to control.

But he said the program is expanding to include additional wilderness park areas throughout Orange County. Raetz estimated there is roughly 60,000 acres within the entire OC Parks system.

“Along with several hundred volunteers in the Conservancy Fire Watch program, there are other volunteer groups in cities and other areas in Orange County,” said Raetz. “We’re developing a network with the intention of reducing fire risk.”

The Conservancy does not own any land, but manages land for various agencies including OC Parks (county parks system) and the cities of Irvine and Newport Beach. OC Parks is the primary funding source for the fire watch program.