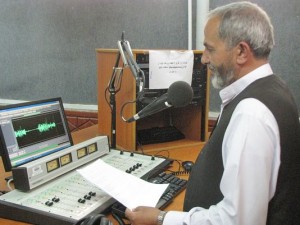 The U.S. Special Operations Command wants to find technology that would allow it to locate AM and FM radio signals in a specific area and then override those signals to send propaganda messages.

The SOCOM solicitation, posted last month, calls for “sources to provide a radio broadcast system capable of searching for and acquiring every AM and FM radio station in a specific area and then broadcasting a message(s) in the target area on all acquired AM and FM radio station frequencies.” The command, which is playing a larger role in military propaganda, is contemplating doing foreign comparative testing, which examines foreign technology to see if it’s capable of doing the job, as it examines potential options, the solicitation said.

The Pentagon has long used radio stations around the world to help spread its message and turn adversaries into allies, if only temporarily. It pays Afghan radio stations to carry pro-American programming and messages throughout Afghanistan. U.S. money from the Agency for International Development, State Department and Pentagon has also been spent developing Afghan broadcasters.

This latest technology could give U.S. forces the ability to target audiences in certain areas with a specific message. It would be part of what the Pentagon calls Military Information Support Operations (MISO), which is the latest term for what used to be called psychological operations.

The MISO program is under fire by the Senate Armed Services Committee for not always delivering on its promised results. Many of its programs lack specific ways to determine if they work or not. A Government Accountability Office report in May found fault with the program’s Trans Regional Web Initiative, a series of news websites aimed at influencing public opinion around the world.

In 2012, the Pentagon spent $22 million on the sites for each of the combatant commands, including Central Command in the Middle East. The Pentagon, according to the report, “states that the websites are an important tool to influence foreign audiences to counter violent extremism and help achieve combatant commanders’ objectives, but we found instances where the websites were not well coordinated with embassy country team or (other military propaganda) efforts.”

The Senate’s defense authorization bill for next year proposes eliminating all funding for the sites in a provision authored by Sen. Carl Levin, D-Mich., the chairman of the Senate Armed Services Committee.