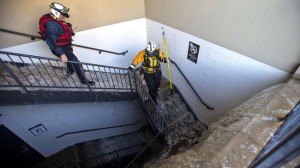 The 30-inch pipe’s rupture shot water 30-feet into the air sending an estimated 20 million gallons roaring onto roads and the campus.

Urban search and rescue crews from the LAFD searched the flooded parking garages for any possible victims. No injuries were reported from the flooding.

From the website of Los Angeles Department of Water and Power:

LADWP crews have completed shutting off water to the 30-inch trunkline that ruptured earlier this afternoon on Sunset Boulevard, near UCLA.

Preliminary information indicates that no customers are without water and water quality was not adversely impacted. Crews will begin work immediately to repair the 30-inch ruptured steel-riveted pipe that delivers water to the area at a high velocity from Upper Stone Canyon Reservoir.

Crews shut off three large diameter valves as quickly and safely as they could, taking care to avoid further damage due to pressure in adjacent pipes that could have lead to further ruptures if care was not taken.

Water flow through the pipe was estimated at 75,000 gallons per minute at the peak. LADWP serves approximately 500 million gallons of water to customers each day.

Members of the public are advised to avoid the area.

Recommended traffic detours are as follows: Westbound on Sunset should go south on Beverly Glen then west on Wilshire Boulevard then back north on Veteran/Sepulveda to get around the closure. Eastbound traffic should head south on Veteran/Sepulveda then east on Wilshire Boulevard, then head north on Beverly Glen. For access into UCLA Campus please use Westwood Boulevard.