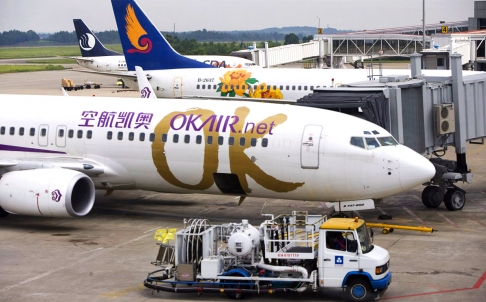 The United States is not the only place where pirate broadcasters appear to be thriving.

Law enforcement agencies in China have uncovered pirate radio stations operating in big cities and provinces using equipment that could disrupt communications between pilots and air traffic controllers, according to a state media report.

A lack of regulations controlling the sale and use of radio transmitters meant the devices were easily available on the market, unnamed legal experts said.

The authorities said they had found high-powered radio transmitters in private hands in Beijing and Tianjin and in Hainan , Yunnan and Guangdong provinces.

Okay Airways, based in Beijing, complained to radio administration officials in Tianjin in March that its radio frequency was severely disrupted by a pirate radio station.

Jiang Tao, a pilot with the airline, was quoted as saying that the inflight navigation system and communications with control towers were often disturbed by pirate radio broadcasts.

If the radio frequency was occupied when aircraft had to take off or land, the pilots could lose contact with the control tower, threatening safety, the report said, quoting unnamed industry experts.

The Beijing Municipal Bureau of Radio and Television recently uncovered a pirate radio station operating on top of a residential block in the capital’s Chaoyang district. The station transmitted advertisements on a frequency usually used by licensed stations, the report said.

Pirate stations try to sell ads for escort agencies, medical products and other services, according to reports.

The bureau has recently seized a 2,000-watt transmitter whose signal can reach most places in the capital.

Pirate radio equipment could be bought easily on online shopping sites for less than 50,000 yuan (HK$62,900), the report added.

Broadcast and print media are tightly controlled by the government on the mainland and the authorities are also trying to increase their grip on the use of social media.