LAFD Battles Wharf Fire at the Port of L.A. 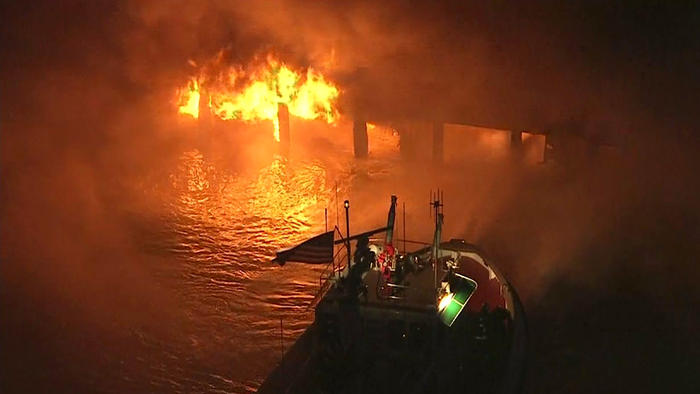 From Katherine Main, Spokesperson for LAFD

The Los Angeles Fire Department was called at 6:41 PM on September 22, 2014, to 802 S Fries Ave in Wilmington. Firefighters arrived quickly by air, land, and sea to find fire billowing from under a 150 foot wharf. An aggressive fire attack was mounted by LAFD’s Fire Boats as highly trained divers entered the dangerous and dark waters to assault the blaze from below the pier. Firefighters were met with many challenges including the highly flammable creosote soaked timbers supporting the concrete wharf which were inaccessible from land.

Due to the scope of the incident the Los Angeles Fire Department established a unified command with Los Angeles Port Police, United Stated Coast Guard, and the Long Beach Fire Department. During the firefight two large cargo ships were moved to a safe location as a precaution. Over 170 Firefighters all under the command of Deputy Chief Mario Rueda contained the bulk of the fire in just under two hours. The stubborn hard to reach fire smoldered for hours and firefighters continue to work through the night.

The fire burned under POSHA’s steel warehouse causing collapse of areas of the flooring and large coils of steel to fall to the water below. Strategic use of a backhoe to create a large trench in the wharf halted the fires progress, which was confined to the wharf and under the warehouse.

The smoke caused the overnight closure of several shipping terminals, leading to the evacuation of over 850 dock workers as a precaution. Harbor area residents were advised to avoid the smoke, close windows, and stay inside. It is anticipated the Los Angeles Port will return to normal operations tomorrow.

No injuries were reported.

Dollar loss of the heavily damages wharf and warehouse is being calculated. The cause of this fire remains under active investigation by the Los Angeles Fire Department Arson Section.