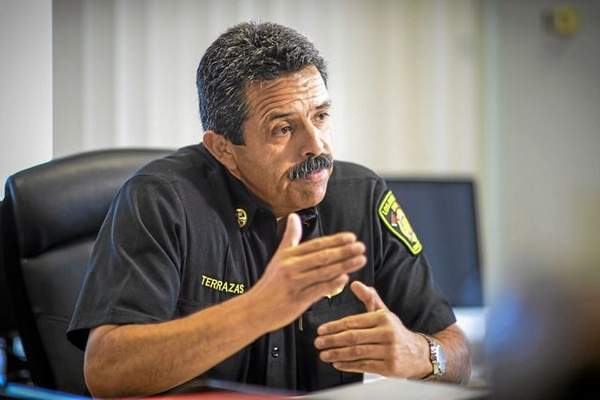 Fire Chief Ralph Terrazas expects to roll out by the new year his creation of four bureaus modeled after the Los Angeles Police Department, one of the key reforms called for to improve accountability in the Los Angeles Fire Department.

The Fire Commission was briefed Tuesday November 18 on the plan. Terrazas expects the new bureau system to take effect in January and will be overseen by four deputy chiefs who, in effect, will become the fire chiefs for those bureaus.

“The objective of our landmark reorganization is for each bureau commander and their staff to ‘own’ all issues within their geographical area, in order to establish a more effective business model than was possible with our traditional platoon duty system,” Terrazas wrote in a memo on his plans.

Each bureau will be overseen by a deputy chief, who will be responsible for all operations in that region.

Terrazas said he hopes to see the deputy chiefs and their assistants have greater communication with the public and elected officials and also establish a bench of future leaders.

“The reorganization will result in a dramatic improvement in the department’s responsiveness to our members, the public, the business community and our elected officials,” Terrazas said. “This improvement is long overdue and critical to our efforts to maintain our position as a highly regarded fire service leader.”

The bureaus will generally follow the boundaries used by the LAPD in its system, with some changes due to geographical features and existing boundaries covered by stations.

The proposal was first recommended in a report by PA Consulting earlier this year as a package of reforms on how to make the LAFD more responsive and accountable.

Among its other recommendations were giving the chief a five-year contract and revamping its disciplinary system. It also recommended hiring civilian experts for certain programs, such as information technology and communications, rather than being staffed by firefighters.

Creation of the bureaus will assist Terrazas as the department begins to implement the FireStat system that analyzes response times.

In its initial rollout, FireStat meetings needed to be held with each of the 102 stations to go over the material.

Once the bureaus are created, the deputy chief for that area will report on the issues and be questioned about steps being taken to make improvements.

The consultants were brought in after a series of problems regarding response times within the Fire Department as well as complaints over hiring and disciplinary procedures. A separate report was commissioned from RAND Corp. to look at hiring and complaints of favoritism and nepotism.

Last month, Mayor Eric Garcetti and Terrazas released the initial reports gathered under the long-awaited FireStat program that measures response times from individual stations and the city as a whole — numbers that the mayor said “stunk.”