Summit with a View — Of Towers 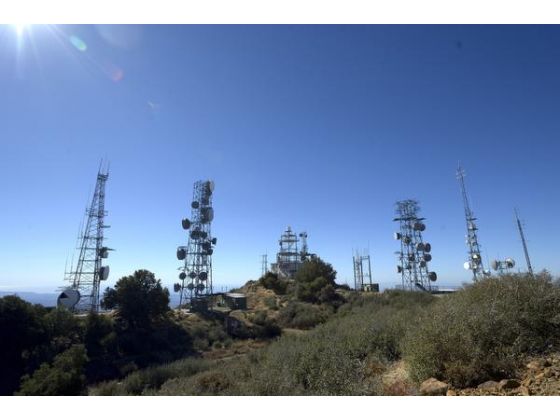 From the Orange County Register published on November 16, 2014.

As the sun’s last rays settle on Saddleback Mountain, the wind picks up and rattles metal signs warning against getting too close to buildings because of high radio frequency levels.

For most visitors, getting to the top requires hiking at least 16 miles round trip and gaining more than 4,000 feet of elevation. Their expectation is to check out 360-degree views. But when it comes to mountain tops in a world of cellphones, television signals and satellite reception, much-coveted high and clear exposure means clear signals – and revenue.

But it’s money that bypasses both Orange County and the financially challanged local U.S. Forest Service and goes straight to the U.S. Treasury.

When communications companies and government agencies started constructing radio towers and other communications facilities on the peak more than a half-century ago, the money wasn’t a big deal.

But today, these towers bring the U.S. government tens of thousands of dollars per year.

On a recent day, I rode with Register photographer Jeff Gritchen toward Santiago Peak, the tallest spot in Orange County at 5,689 feet, as he navigated his Honda Pilot up 11 miles of narrow, rocky, winding dirt road from Corona.

Our plan was to document the structures – so you can avoid the long hike – and check out the view that takes in Catalina Island, downtown Los Angeles and even Malibu.

Yes, it was an idea that seemed wise at the time but rendered disastrous results. More on that in a minute.

We discovered old structures, rotting wood poles and rusting metal struts. We found graffiti scratched into one propane tank dating back more than two decades. We also discovered there is no 360-degree view from Santiago Peak.

Instead, we discovered antenna city.

With little human presence – aside from audible hums from the towers and the cryptic squawk of a radio inside one of the buildings – the whistling wind was unnerving. Omnipresent warning signs induced a headache, perhaps more out of paranoia than by doses of radio and microwave signals.

Up here, AT&T offers a great cell signal, but Verizon doesn’t come in at all, despite the wireless phone provider having facilities up here.

The buildings and towers, about 20 total – not including dishes, and transmitters attached to those towers – don’t pick up cell signals from individual phones. That’s not their role.

Rather, the towers help transmit signals across Southern California, from San Diego to the San Fernando Valley, from coastal Orange County to the Inland Empire.

Because of unobstructed sight lines, the U.S. Forest Service built the first radio tower on Santiago Peak in 1946 and partnered with Southern California Edison for a joint facility just two years later.

By 1952, nine companies had facilities on the mountain, and by the early 1990s, the peak had 20 communication facilities.

Most of the sites were developed from 1970 to 1990, in the heyday of two-way radio, and about half of the facility owners are government agencies and public utilities such as the U.S. Air Force, the Forest Service and Southern California Edison. The other half are private users, such as Verizon Wireless and American Tower, one of about five major companies that owns towers around the country.

Before cellphones, the only way a field plumber or electrician could communicate with the office was with a two-way radio, often installed in his truck. Cellphones, which became prevalent in the mid-’90s, made that use obsolete.

With much less two-way radio usage, the buildings on Santiago Peak are actually used less than they were a couple decades ago, Daniel said.

But emergency responders and workers in remote regions still rely on two-way radios because of spotty cell service, or a need to have communications if the cell service goes down. Because of that, two-way radio signals still route through Santiago Peak.

“We’re seeing a little bit of a resurgence in it by companies that anticipate needing communications when there’s an earthquake or after an earthquake or some event that would knock out a more fragile cellular system,” Daniel said.

Other uses have filled in the gap left by two-way radio, such as in-flight Internet for airplanes. Base stations are situated at places such as Santiago Peak to send Internet signals to airplanes in the air.

But mostly the towers are now used to carry Internet signals, along with cellphone signals and microwaves, a certain kind of radio frequency that acts like the focused beam of a flashlight.

Verizon Wireless is one of the largest microwave operators in the United States, Daniel said. Rather than rely on wired fiber-optic cables to connect cell sites, Verizon sends microwave signals from mountaintops to other high locations across the country.

But with so many communications signals passing through Santiago Peak, managers have to ensure signals don’t interfere with one another. To make sure that doesn’t happen, facility users must circulate a review notice to other operators if they want to use additional frequency for signals.

Even though it may seem like the towers have proliferated in recent years, no new structure has been added to the peak in more than two decades. But ownership of some of the towers has changed, as has their use – and the number of transmitters attached to the towers.

There are several reasons no new towers have been added to Santiago Peak.

On reason is that the permitting process is one “littered with red tape,” according to Jake Rodriguez, recreation and lands officer for the Trabuco District, which includes Santiago Peak. Another reason is that the Forest Service isn’t inclined to add additional buildings to the top of the mountain because it must balance other uses for the land such as recreation and wildlife habitat.

And the peak, Rodriguez admits, is already pretty crowded.

Rather than permit new buildings, the Forest Service encourages users to piggyback on one another’s towers and buildings.

To even get a new structure built, applicants must demonstrate there isn’t existing capacity in one of the current buildings.

“We don’t want a thousand buildings with one occupant. We’d rather have 20 buildings up there with 10 or 15 occupants,” Rodriguez said.

“We don’t want it to be an eyesore or a blight. So if there’s not a need, we’re not going to authorize someone to build.”

Calculating rental payments for each facility is a convoluted process. Forest Service rules require that fees vary depending on the population of the area served, how many users have equipment on a given tower and whether any of the permittees are subject to special exemptions.

Additionally, rent payments vary wildly depending on the use of the tower and how many others are renting space on it.

“I think it is a misconception from permittees – they may think the Forest Service is getting all this money and it’s not quite that simple. It’s going back to the United States of America,” Rodriguez said.

Rodriguez declined to say how much total money the communications towers at Santiago Peak generate. But according to the 2015 fee schedule released by the Forest Service, base payments for facilities serving more than 5 million people – which includes the greater Los Angeles area – range from $15,500 per year for microwave and wireless Internet providers to $18,600 for cellphone providers.

The rates change every year based on inflation, and the U.S. government reviews rates every 10 years to make sure they’re in line with market values.

All the radio frequencies passing over Santiago Peak worry some people. But the Forest Service said all the facilities follow Federal Communications Commission guidelines for human health and safety, and – despite those warning signs – don’t pose a threat to people on the summit.

Rodriguez said he inspects the buildings at the peak and reports he never has found unsafe frequency levels.

“Typically, most of the waves are going up over the heads of the people that would be at the site because most of the antennas are not at people’s height,” he said.

It also turns out that most of the signals aren’t meant for individual cellphone users.

Two miles into our 11-mile return trip down a rocky dirt road, a sharp rock gashes the side of a tire on the Honda Pilot. We pull out the minimalist spare, but it is unusable on the rugged terrain and soon separates from its wheel.

Hours later, the truck arrives. By the time we reach the civilization, it’s dark – a lesson of sorts for those who decide to visit the summit.