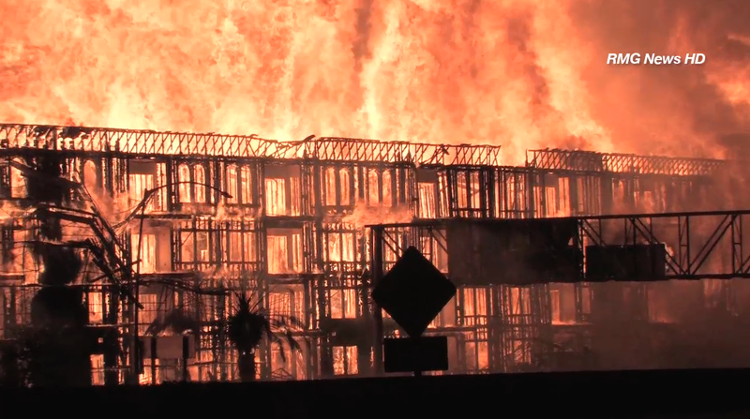 Over 250 LAFD personnel battled a massive fire at a partially built apartment complex in Downtown Los Angeles early Monday morning. Flames and smoke from the blaze could be seen for miles. The blaze also caused officials to partially close the 101 and 110 freeways.

“This is a historic fire, what we as firefighters would call ‘a career fire,'” said David Ortiz, public information officer at the Los Angeles Fire Department. “It’s huge. I really can’t remember a building fire this big and I have been with the department for 13 years.”

LAFD officials said it was too early to tell what caused the fire but said the seven-story building looked certain to be a complete loss. At the time of the fire, the complex stood half-finished with exposed wooden framework. The fire was so intense that radiant heat from the blaze caused fire to break out in two office buildings across the street, Ortiz said. Those were quickly extinguished and there were no reports of injuries, he added.