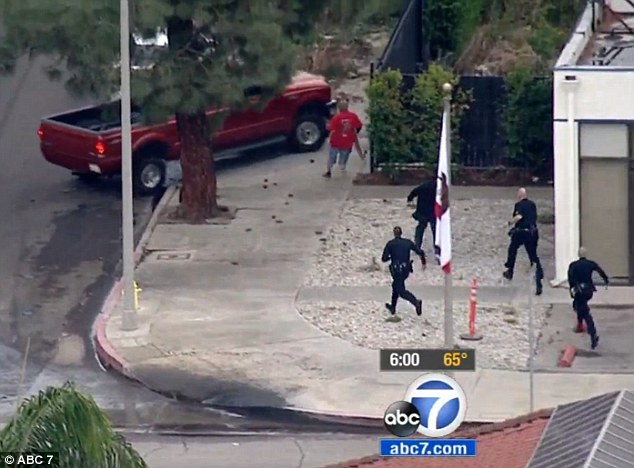 A suspect wanted for allegedly stealing a BMW sedan led police on a chase in Van Nuys, bailed out on foot and attempted to get away on a skateboard before he was blocked by a good Samaritan in a pickup truck as officers arrived.

The suspect exited the 405 Freeway at Victory Boulevard at about 3:40 p.m. and drove on surface streets in Van Nuys at high speeds, reaching up to 90 mph at times.

On eastbound Sherman Way, the suspect crashed into the back of another vehicle in stopped traffic. The suspect then jumped out of the BMW and ran into oncoming traffic with a longboard skateboard in his arms.

He ran northbound on Valjean Avenue, jumped on his skateboard and rode the sidewalk for less than half a block before running into traffic again. A pickup-truck driver blocked him in traffic, then accelerated and turned right on Cantlay Street and blocked the suspect at a gate. The suspect was immediately arrested without incident.

“I seen the guy running with a skateboard in his hand, and he’s running from the cops, they’re like right on him, there’s about six or seven cops, and he got on his skateboard and he started moving, and it was just instinct just to block the guy off, slow him down a little bit,” the pickup truck driver, Lou Pizarro, told Eyewitness News. “That’s all I could do.

No officers were injured. The suspect was not immediately identified.

Editor’s Note: Mr. Pizarro (the pickup truck driver) is the star of Operation Repo, a “reality” TV series. Thanks to Glen Rothstein, KK6OTP, LA-145 for broadcasting this out on our club repeater. -Tim