Man Who Flew Drone in Path of LAPD Helicopter Charged 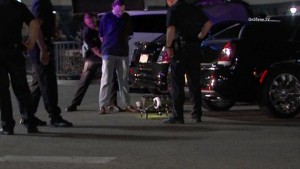 A man who allegedly flew a drone into the path of a Los Angeles Police Department helicopter involved in a suspect search in Hollywood, forcing the pilot to take evasive action, was charged Tuesday with a pair of misdemeanors.

Martin Sheldon, 57, was charged with two counts of obstructing a peace officer in the lawful performance of his duties, according to the City Attorney’s Office. He is due to be arraigned Oct. 26.

According to police and prosecutors, Sheldon allegedly flew a drone toward the helicopter around 11:30 p.m. Aug. 27 while the pilot was assisting with a search for an assault suspect. The pilot was forced to break off of the search due to the drone, prosecutors said.

Police said they tracked down the drone operator, who was in the parking lot of a mini-mall at Sunset Boulevard and North Gower Street. Police said the helicopter was over Sunset and Western avenues when it encountered the drone.

According to the City Attorney’s Office, video footage from the drone shows the device approaching the helicopter and its spotlight, and shows numerous police units on the ground.

Sheldon faces up to a year in jail and $1,000 in fines if convicted, prosecutors said.

“Using a drone to interfere with a police investigation places our officers and the public at serious risk,” City Attorney Mike Feuer said.