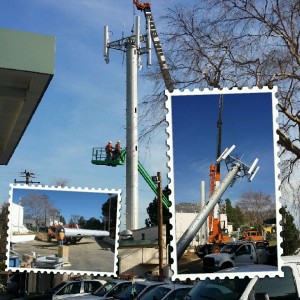 The much-anticipated public-safety LTE network being deployed by the Los Angeles Regional Interoperable Communications System (LA-RICS) is on track to be completed by next week’s federal deadline, and the new system should be operational by the end of the year, according to an LA-RICS spokesman.

In the spring, LA-RICS reduced the number of eNodeB base stations in its proposed public-safety LTE network to 78—a dramatic drop from the original plan of 232 sites but still the largest such deployment in the U.S.—with 63 permanent tower sites and 15 deployable sites being located at fixed locations.

LA-RICS spokesman Russ Stanton said yesterday that 50 of the 63 permanent sites have been completed. Of the remaining 13 permanent sites, “9 or 10” should be finished by the end of this week, meaning 3 or 4 sites need to be done by the Sept. 30 deadline, he said.

LA-RICS has received 11 of the 15 cell on wheels (COWs) deployable towers, and the other four units are scheduled to be delivered by next Wednesday’s deadline, Stanton said.

Most of the LA-RICS public-safety LTE project is being funded with federal grant money from the Broadband Technology Opportunities Program (BTOP), which expires on Sept. 30. No extension of the statutory Sept. 30 deadline is expected, because it could only happen via an act of Congress.

Network optimization and testing is expected to take 6 to 8 weeks, after which the public-safety LTE system should be ready for regular public-safety operations, Stanton said.

On May 1, LA-RICS received the necessary federal approval to restart the public-safety LTE deployment, which is the largest of the five early-builder projects that are expected to provide real-world insights for the FirstNet nationwide public-safety broadband network. All community-outreach sessions required by local governments under the new plan have been completed, Stanton said during an interview with IWCE’s Urgent Communications.

One area of change in the revised LTE plan is that two microwave sites no longer will be part of the initial deployment, according to Stanton. One microwave site has been dropped from the plan entirely, while the other will be constructed as part of the LA-RICS deployment of a P25 system for the region, he said.