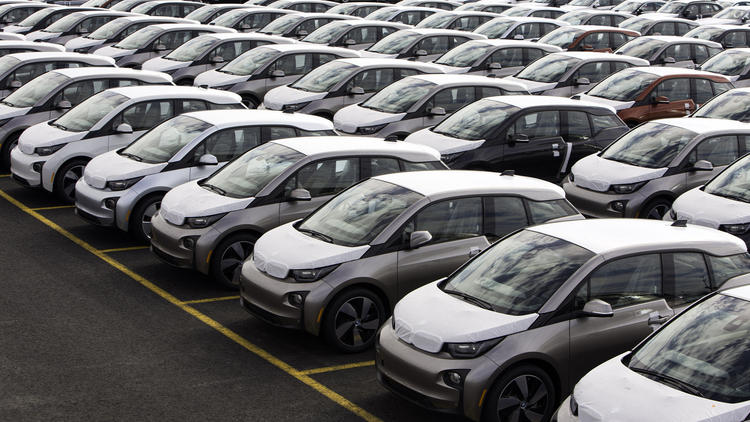 BMW is leasing 100 of its i3 all-electric plug-in vehicles, which the LAPD plans to use for community outreach and other police business — but not patrols or car chases.

That will bring to almost 200 the number of electric vehicles the city is using in its various departments.

In the last year, the LAPD has been seen testing Tesla’s P85D, a variant of the Model S that has been discontinued. The Police Department was apparently looking at buying or leasing the replacement, the P90D, but decided on the BMW i3 instead.

Weak and small compared with the mighty Tesla, the BMW is also more affordable. The small German electric car costs $42,000, or well under half the Tesla’s price.

Vartan Yegiyan, who oversees the LAPD’s motor transport division, said the BMWs would be leased for $387 a month. A three-year lease for 100 cars will total about $1.4 million, including maintenance and repairs, he said.

Yegiyan said it will cost an additional $1.5 million for the infrastructure to charge the BMWs and other electric vehicles purchased in the future.

Although the Tesla is capable of massive acceleration, top speeds suitable for high-speed chases and a range of almost 300 miles, the smaller, more moderate i3 accelerates quickly, has a lower top speed and can go only 80 to 100 miles on one electric charge.

But for an additional fee, the i3 is also available with a gas-engine “extender” that increases the range to about 150 miles.

The LAPD’s i3 lease could lead to a deal for vehicles more suitable for patrol work. Police Chief Charlie Beck said the department was continuing to work with BMW, Tesla and other automakers to create a more capable electric vehicle.

“We want to go to the next step,” he said. “They will absolutely be the patrol cars of the future.”

Los Angeles Mayor Eric Garcetti hailed the move, saying, “We should be thinking green in everything we do,” and adding that the adoption of electric cars will “also save money and resources.”

Garcetti said the LAPD is leasing the vehicles as part of a three-year agreement with BMW, enabling the city “to be flexible and to change as EV technology evolves further.”

In making the announcement, BMW said the availability of a large network of BMW “i centers,” which can service electric vehicles, influenced the LAPD’s decision.

The fact that the LAPD uses BMW motorcycles in its fleet may also have helped seal the deal.