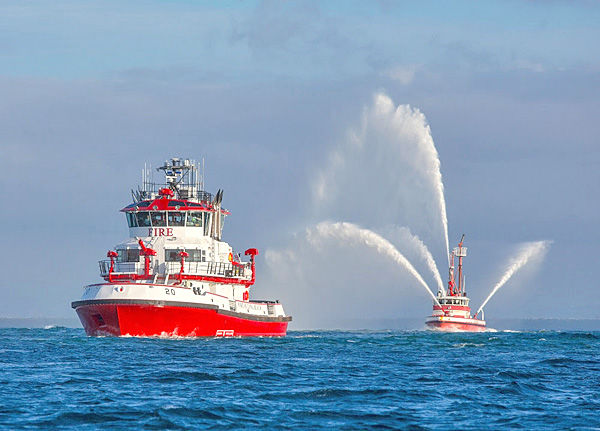 Fire Chief Mike DuRee said the department has had the vessel for a couple of months, and used it in fires, such as the blaze at the old Ruby’s Diner at the end of the Seal Beach Pier.

But, there were a few minor things that needed to be tweaked.

“There was a punch list that needed to get fixed,” DuRee said. “It also gave our crew the opportunity to get familiar with it.”

The vessel, called “Protector,” has its dedication from noon to 1 p.m. on Wednesday, June 8, at the Port of Long Beach Joint Command and Control Center. The ceremony isn’t public, port media relations lead Lee Peterson said.

The Protector was built in Washington State, DuRee said.

“They build all boats up there, don’t they?” he said.

The boat has a laundry list of features, DuRee said, needed to battle fires these days.

“The reality is because of the types of ships we see in port, we needed it to enhance our capabilities,” DuRee said. “We have much greater issues to deal with in the port.”

The fire department’s other boats were built in the mid-1980s, DuRee said, and flow about 10,000 gallons of water per minute.

DuRee said the boat is 108 feet long and designed much like a tugboat with its Voith Schneider drive system.

“It’s like an egg beater,” DuRee said. “The whole system is unique. It can stay on station and is an industry standard. It’s a lot more maneuverable and designed with a number of features combined… There are no other boats around like it.”

In the Ruby’s Diner fire, the Protector extinguished the fire within three minutes by throwing environmentally friendly Novacool foam on it with its 10 water cannons.

Other features of the Protector include a basket on the deck, allowing firefighters to be hoisted up to a fire, DuRee said. It also has two pilot areas, allowing it to maneuver into very tight quarters, as well as the latest and greatest in navigational equipment, medical station and more, he said. The boat also has CBERN (chemical, biological, explosive, radiological and nuclear) equipment, with its ability to become airtight and produce its own air, he said.

“I’m just scratching the surface of its capabilities,” DuRee said. “We’re absolutely thrilled we have this new asset in town. It’s the most comprehensive boat in the world. My crew down there is still learning… It gives us the ability to provide greater safety.”

To get the Protector and another boat next year, LBFD received about $19 million in federal grant money from the Urban Areas Security Initiative (UASI), DuRee said, and the port matched that amount. He said he was unsure of the total cost. But, Peterson said the total cost for this boat is about $25.8 million.

“We’re very thankful to the Port of Long Beach to help maintain our presence,” DuRee said. “The port made a 50-year investment.”

The UASI assists high-threat, high-density urban areas to build and sustain the capabilities to prevent, protect against, mitigate, respond to and recover from acts of terrorism, according to its website.

As far as money goes, DuRee said he has six crewmembers assigned to the Protector, which is fewer than eight on a similar boat in the city of Los Angeles.

“Not only do we have a better machine, but we don’t need as many to man it,” DuRee said.

He said that helps when it comes to budget talks.

“For the day in and day out operations of the vessel, we think six people is sufficient,” DuRee said.