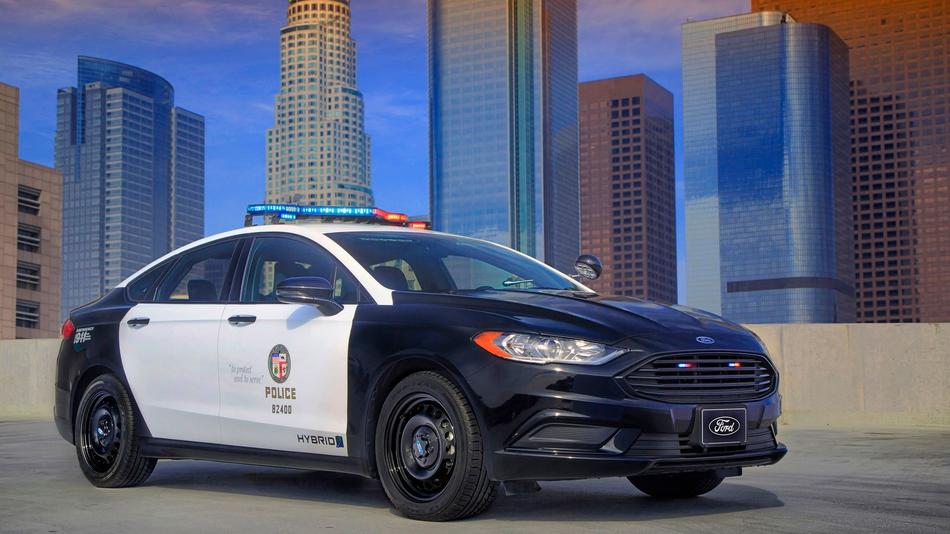 Ford Motor Co. has unveiled the world’s first “pursuit-rated” hybrid police car and the Los Angeles Police Department may be among the first agencies to have one.

Chief Charlie Beck and LAPD officers were expected to help introduce the vehicle at a Monday morning ceremony in Los Angeles.

The Ford Police Responder Hybrid Sedan started life as a Ford Fusion before engineers gave it the law enforcement treatment by upgrading the suspension, beefing up the brakes, adding different wheels and tires, attaching a skid plate and altering the seats so they have room for police utility belts and include an “anti-stab” plate to protect officers from sharp instruments coming from the back seat.

It won its world-first “pursuit-rated” stripes in testing by Michigan State Police and the Los Angeles Sheriff’s Department, Ford said in announcing the new vehicle.

The Responder is driven by Ford’s 2.0-liter, four-cylinder gasoline engine mated to an electric motor powered by a 1.4-kilowatt lithium ion battery. That powertrain, Ford said, will get an EPA-estimated 38 miles per gallon — more than twice the fuel economy in Ford’s current police vehicle, the Interceptor.

Ford hasn’t published specifications on the new vehicle yet, but Arie Groeneveld, of the company’s police programs department, said the Responder will accelerate from zero to 60 mph at about the same rate as the Crown Victoria-based Interceptor police vehicle.

That car scored well in 2016 law enforcement testing. In one test, the Interceptor went zero to 60 in 5.8 seconds, ahead of Dodge’s Charger police vehicle’s 6.6 seconds and Chevrolet’s police Caprice, at 6.7 seconds.

Pricing has not been announced, but hybrid vehicles typically cost more than their internal combustion engine counterparts. Ford executives said fuel savings should pay for the higher cost within one year.

Ford expects the Responder to do well.

“Cities have been asking us for solutions to reduce carbon emissions and costs, and agencies have been asking for greener police cars and greener pursuit vehicles,” said Kevin Koswick, director of Ford’s lease and remarking operations in North America. “We saw a need and we thought we could fulfill it.”

The Responder will go into production early next year. LAPD units could be driving them by late 2018.

Police representatives would not say, prior to the Monday morning event, to what degree the department will invest in the hybrid vehicles.

But Public Information Director Josh Rubenstein said the LAPD is committed to purchasing 300 hybrid and hybrid electric plug-in vehicles by 2020, and to build charging stations and infrastructure to support them.

The department is also committed to deploying battery electric vehicles in certain divisions within the next five years, Rubenstein said.

Ford has done well with police vehicles. For years, many departments relied upon the Crown Victoria for law enforcement duties. Today, Ford claims 63% of the U.S. police patrol pie and says it sells about 32,000 Interceptors a year.

The Responder is part of Ford’s earlier-announced plan to invest $4.5 billion in automobile electrification over the next five years.

Among the 13 new vehicles scheduled to emerge from that program are a hybrid Mustang, a hybrid F-150 pickup truck and a 300-mile-range battery electric vehicle.