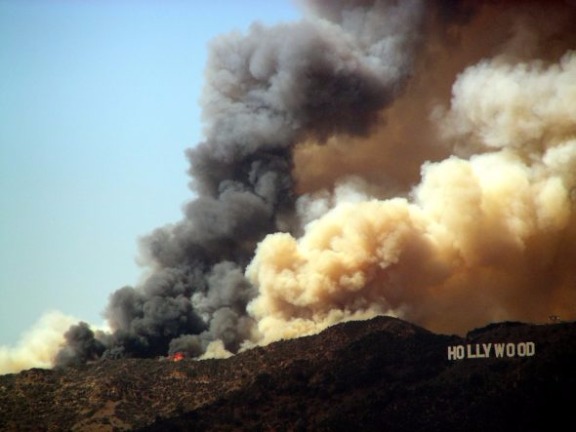 Los Feliz Hills resident Gary Simon took this photo from a friend’s house in the Hollywood Hills during the 2007 Griffith Park fires.

Following a series of devastating fires throughout California’s wine country in October, the 7,000 acre La Tuna fire that burned for three days near the 210 freeway in September and “red flag” parking restrictions—meant to leave streets clear for fire truck access and resident evacuation in times of high fire danger—enacted in the hills of Los Feliz in late October, some locals are wondering if the next wildfire will be in Griffith Park.

Leslie Thorson, who lives on Los Feliz Boulevard, recalls helping a friend evacuate during the wildfires that ravaged Griffith Park in 2007, destroying 800 acres of vegetation, but mercifully, no homes.

“The hillside right across from [my friends] house was ablaze,” said Thorson. “Then I came home [after helping her evacuate] and was told I had to evacuate too. … I grabbed some clothes and my cat and drove to a friend’s house in Hollywood.”

Los Feliz Hills resident Gary Simon said he vividly remembers “seeing flames come over the ridge across the canyon” from his home during the fires.

Simon said he now has a travel kit filled with toiletries and medications at the ready and keeps all of his family photos and important documents on an external hard drive he can easily grab if he needs to evacuate once again.

He also coordinated with a neighbor on the cul de sac below his to install a gate between their two properties to be used as an escape route if either street becomes blocked during a blaze.

According to Simon, he feels it’s “just a matter of time” before there is another fire in the park.

“There is a sense of underlying nervousness among those who were here for the 2007 fire,” said Simon. “Eventually, it’s just the right weather conditions and the right accidents and mistakes—or even a lightning strike” that will lead to a fire.

But according to Los Angeles Fire Dept. (LAFD) Captain Erik Scott, while the likelihood of a small fire breaking out in Griffith Park is very high, another large one on the scale of the 2007 fire is unlikely.

“We jump on these fires immediately [while they are still small], with a very large response,” said Scott, who said firefighters pay close attention to “fire weather”—hot, dry and windy conditions that increase the probability of brush fires—and allocate extra resources to high-risk areas such as Griffith Park.

According to Scott, during October alone, there were multiple small brush fires in Los Angeles, often started by sparks from power lines, cigarettes and catalytic converters among other causes, but firefighters were able to extinguish them quickly.

“Because we’re prepared and rapidly respond, we are able to keep the vast majority [of brush fires] small, and you probably haven’t even heard about them,” said Scott.

In the case of larger fires, said Scott, the LAFD can request extra help from neighboring fire departments, such as those in Glendale, Burbank or Pasadena through what’s known as a “mutual aid” system.

Yet while the spate of recent fires has sent several local firefighters to other regions, according to Scott, the LAFD is sure to keep the majority of first responders close to home.

“We will never send out resources to an area if it would jeopardize our response to local communities within Los Angeles,” he said.

According to Scott, in addition to mutual aid, firefighters need residents’ help as well.

Those living near Griffith Park should ensure they have adequate “brush clearance” within 200 feet their home, said Scott. In other words, grass and weeds should be trimmed to three inches; the bottom third should be trimmed off of bushes and the bottom six feet off of trees. Trees should additionally have a clearance of at least five feet around roofs and 10 feet near chimneys.

“Brush clearance is a way that residents can join the fire department, so to speak,” said Scott. “When we get on scene and we see that proper brush clearance, we are able to then put firefighters between the wall of flames and that home.”

According to Scott, trees and bushes in a properly kept yard should look a bit like “lollipops,” as such yard maintenance is the best way to ensure a home remains intact during a wildfire.

During the La Tuna fire, said Scott, “1,400 homes came within 200 feet of flame and only five of those were destroyed. This was due to the outstanding job of firefighters, but also proper brush clearance” by homeowners.

Residents should “ready” their home with proper brush clearance, remove shake and shingle roofs, have an evacuation plan with a pre-determined route, and know what they plan to take with them.

When a wildfire threatens the area, residents should get “set” by grabbing everything they plan to bring with them and put it in the car. They should also bring outdoor flammables, such as wooden patio furniture or anything else that could catch a spark, indoors.

And of course, when residents are told to evacuate, they should “go” immediately.

But ultimately, said Scott, those living in fire-prone areas should trust their instincts.

“You don’t have to wait to be told to leave,” said Scott. “If you feel unsafe, you can always leave early.”