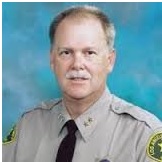 Chief Edson is a nationally recognized leader in the area of Information Sharing, Homeland Security, Communications and Technology. He participates on many Federal, State and Local committees and working groups, and is an active member of many associations, including Chair of the International Public Safety Association, Board of Directors.  He has a Bachelor of Science degree in Information Technology Management and an Associate of Arts degree in Administration of Justice.

Chief Edson is also an Amateur Radio Operator and was licensed in 1991 so he could literally hang out of helicopters holding a video camera connected to a packet radio system!  He transmitted live a bird’s eye view of an incident back to a command post so the incident commander could make educated decisions based on what he saw on the real time video feed.  His call sign is W6EDS (www.W6EDS.us)

Chief Edson was not retired long!  After only one day of retirement he started his new career as the Executive Director of the Los Angeles Regional Interoperable Communications System, also known as, LA-RICS.  LA-RICS is a half a billion dollar public safety voice and data communications system for the 34,000 first and secondary responders in the county.  Details on LA-RICS can be found at www.LA-RICS.org

We think you will find Scott’s information very interesting and I encourage you to come to the meeting if at all possible.