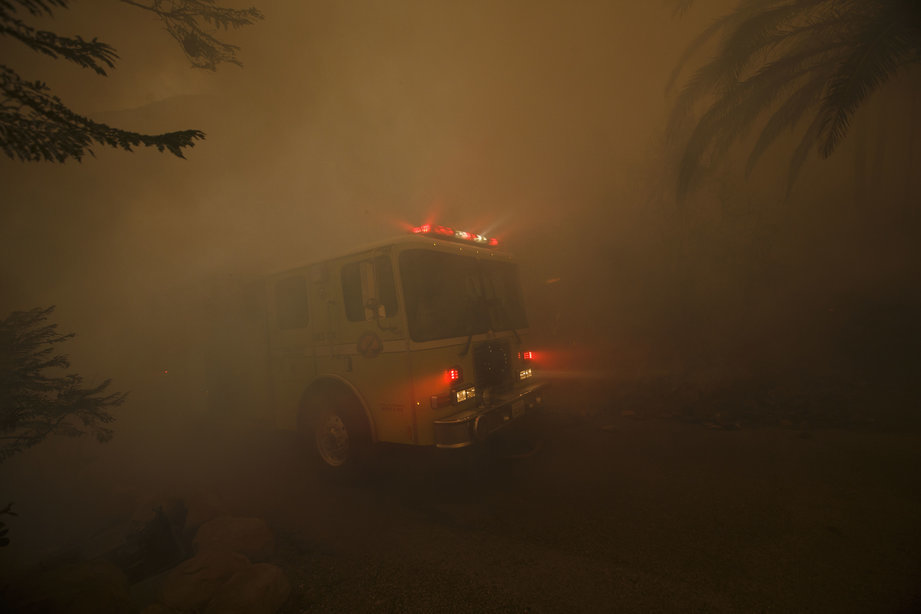 The Sonoma ridgeline was a sunrise of flame as Sgt. Brandon Cutting led deputies up country roads to pound on doors, hollering “Sheriff’s Office!”

Thirty minutes later, with Cutting huffing from exertion and choking in thick smoke, the evacuation of Redwood Hill was still playing out one door at a time. He followed the sound of shouts to an officer struggling to carry a disabled woman. Her house was on fire. Her shoe on the ground. The night around them was orange in every direction.

It was 11 on a Sunday night, the beginning of what would be the most destructive fire siege in California history. Frantic rescues were taking place across wine country as heavy winds ripped down power lines and the dry hills lit up in flames. Modern technology in the form of robocalls and digital alerts would not join the fight to roust sleeping residents for another half an hour.

When the warnings came, they were not received by many of those in the most peril.

Two months after the wine country fires, officials still debate whether more could have been done to give residents earlier warnings before the fires swept in, ultimately killing 44 people and destroying more than 10,000 homes.

The fires highlighted the inadequacies of the emergency warnings officials employed and have prompted a push for new safety protocols. Some of the same problems occurred two months later when the Thomas fire — the largest on record in California — swept through Santa Barbara and Ventura counties.

In the end, the warnings that officials sent reached only a fraction of those in the fire’s path, and emergency agencies struggled to direct warnings to the correct geographic areas. The situation left officials frustrated and looking for answers.

“I can use my cellphone to order a pizza and it gets here,” said Rob Lewin, director of the Santa Barbara County Office of Emergency Management. “Why can’t I have that same system to save people’s lives?”

Although weather forecasters told fire departments across Northern California to prepare for incendiary conditions, decisions to broadcast evacuation orders did not take place until hours after the fires started and residents were already trapped. Those caught by surprise jumped into swimming pools or water tanks, or ran through vineyards.

Fires flanked tourists and residents alike in Napa from three sides, but Napa County relied on sending cellphone text messages to the small population that had the foresight to register in advance. It uses the same tool to announce parades and water main breaks.

Electronic logs show that not until the following afternoon did the county attempt to broaden its warnings to include some 53,000 landlines gleaned from AT&T — a message asking residents to refrain from dialing 911.

The effort made no allowance for the tourists who are the lifeblood of the Napa economy. Hotel staff at a luxury golf resort pulled guests from their rooms in pajamas even as highway patrol medevac teams plucked trapped residents off the ridge above by helicopter. The deputies attempting to knock on doors couldn’t even get up the fire-blocked road.

Sonoma County sent text messages and robocalls, but records obtained under the California Public Records Act show only 50 percent of the numbers on its call list worked. An analysis of the calls shows the county tried to reach less than a tenth of those living in the targeted warning area. Fewer than a third of that one-tenth would pick up the phone.

Every county had the capacity for alerts carried on a federal system that would loudly buzz every cellphone within range of a working tower — by sending the messages either on their own or through the state. Of the eight counties hit by 14 fires that night, only Lake County employed the system. A neighboring county that had no fire, Marin, used the system to tell fire evacuees where shelters were open.

In Sonoma, where Cutting was stationed that night, emergency managers said they decided against the federal wireless warning system. County emergency manager Chris Helgren said he was worried the notoriously imprecise system would trigger a countywide panic. Mass evacuations on the single highway through town would have made the emergency even more dire. In the end, dozens died in Sonoma as the Tubbs fire swept from the mountain vale of Calistoga into a suburb of Santa Rosa.

Mendocino County was 90 minutes into its wildfire when the first call came from the field for evacuation warnings. The dispatcher wrestled 10 minutes with the wording, then called a lieutenant at home. He encouraged a valleywide warning “just so we can get people awake.” But she worried about downed power lines, and they agreed to “hold off, because we have to figure out where (residents) are going to go.”

It was 43 minutes before the county launched its phone-dialing system to ring some 4,000 numbers in Redwood Valley, already engulfed in fire. The automated phone messages were limited to incomplete phone lists, and then blacked out when cell towers were lost to the fire.

Nine people died in that valley, in their homes or attempting to leave.

When wildfires hit Southern California in December, officials were more aggressive about using various electronic communications systems, including an unprecedented seven-county alert on the eve of Santa Ana winds telling millions of Californians to keep a watch through the night for fire. But emergency managers say their efforts to warn residents were hampered by its own share of technological faults.

Santa Barbara County used the federal wireless system 13 times over the course of a week to send cellphone alerts. Three times it sought to contain the warnings to small areas drawn on alert maps sent to FEMA, but county officials said they presume even those alerts were cast broadly and confused those not in danger.

The 5-year-old wireless alert system — the same network used to buzz phones with Amber alerts — falls under the joint control of the Federal Emergency Management Agency and the Federal Communications Commission. Participation by cellphone carriers is voluntary. The messages are limited to 90 characters and broadcast from cell towers like radio signals, not phone calls, so they consume minimal bandwidth.

Original regulations required only that carriers restrain those broadcasts to the county level. The FCC in September 2016 issued an order requiring better targeting, but last year interpreted that ruling to allow cellphone carriers to define the “best approximate” target of a message as an entire county.

Emergency managers told the FCC that alerts can come close to their intended marks in dense urban areas where there are many towers. But in rural areas — wildfire terrain — so-called “boomer” towers cast warnings 20 miles outside the intended alert area.

Therefore, Santa Barbara stuffed so much geography into 90 characters, its emergency evacuation orders looked like this:

FEMA staff confirmed that cell carriers can choose which cell towers transmit the emergency warning, and it is up to them whether to even send a warning where the alert area is less than the cell tower coverage area. They are not required to make those policies public, robbing emergency managers of the chance to know in advance how their message will be carried and adjust accordingly.

“Right now if we draw a polygon (to target an alert), we have the potential to do more harm than good,” said Francisco Sanchez, emergency manager for Harris County, Texas, which includes Houston, and a primary champion of new FCC rules to improve wireless alerts.

Sanchez’s concerns are the same ones that Sonoma County’s Helgren raised: Mass alerts can make matters worse, especially in regions with limited routes in and out of a disaster area. Despite handling a disaster roster that included Hurricane Harvey this fall, Sanchez has issued a wireless alert only once — to tell county residents to not call 911 so that emergency calls could get through.

When home phones largely ran on copper wire land lines, emergency officials could use their 911 systems as a calling tree to deliver warnings. Private vendors have since stepped in to provide those services as well as the software and servers to call up cellphone owners.

The reach of those systems are limited by the phone lists they use — usually a combination of data bought from private marketers, telephone companies and numbers provided by voluntary subscribers.

Call records provided by Sonoma County show its efforts to warn residents of the deadly Tubbs fire were a success just 50 percent of the time — counting calls that went straight to answering machines. Numbers provided by residents subscribing to the county’s system had a 90 percent success rate. But those numbers made up only 15 percent of the dialing list. For the first warning of the Tubbs fire that meant only 213 numbers in an area with more than 13,000 residents, according to U.S. Census data.

Meanwhile the thousands of numbers provided by the county’s vendor failed to be answered 62 percent of the time.

Shortly after the October fire siege, Sacramento County ran a test of its own emergency dialing system, provided by a different vendor. Data shared with The Times show Sacramento had similarly low call completion rates: Out of more than 34,000 calls, just over 2,000 were answered and 3,000 went to voicemail.

Sacramento County pays to update its phone calling list every six months, county officials said, but to reduce error rates the county is considering buying new numbers every quarter. Sonoma County, Helgren said, had not updated its phone list since signing up for the private service in mid-2016.

Technological advances have further eroded the usefulness of other warning tools, managers said, including the emergency broadcast system that once was the backbone of the country’s civil alert muscle.

TV and radio stations, unlike cellphone carriers, are still required to participate in what is now called the Emergency Alert System — the service that begins a public warning with blaring tones. But the network was built to work with analog broadcasting, not today’s digital technology.

As a result, when Santa Barbara tried to send an EAS broadcast last year to warn residents of flash floods, no message appeared on viewers’ screens. Something else happened. Their channels changed to C-SPAN.

County officials, cable providers and federal officials are still trying to figure out what happened, said Lewin, director of the Santa Barbara County Office of Emergency Management. In the meantime, even with wildfire forcing evacuations in his backyard, he will not use the system.

Lewin is looking for a technological fix to these gaps in his warning tools.

In Mendocino County, where emergency managers discovered that steep ridges block even the radio signals of National Oceanic and Atmospheric Administration weather alerts, Sheriff Thomas Allman has settled on a different path.

He is buying air sirens.