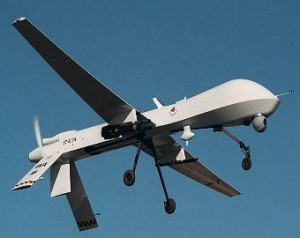 Armed with a search warrant, Nelson County Sheriff Kelly Janke went looking for six missing cows on the Brossart family farm in the early evening of June 23. Three men brandishing rifles chased him off, he said.

Janke knew the gunmen could be anywhere on the 3,000-acre spread in eastern North Dakota. Fearful of an armed standoff, he called in reinforcements from the state Highway Patrol, a regional SWAT team, a bomb squad, ambulances and deputy sheriffs from three other counties.

He also called in a Predator B drone.

As the unmanned aircraft circled 2 miles overhead the next morning, sophisticated sensors under the nose helped pinpoint the three suspects and showed they were unarmed. Police rushed in and made the first known arrests of U.S. citizens with help from a Predator, the spy drone that has helped revolutionize modern warfare.

But that was just the start. Local police say they have used two unarmed Predators based at Grand Forks Air Force Base to fly at least two dozen surveillance flights since June. The FBI and Drug Enforcement Administration have used Predators for other domestic investigations, officials said.

“We don’t use [drones] on every call out,” said Bill Macki, head of the police SWAT team in Grand Forks. “If we have something in town like an apartment complex, we don’t call them.”

The drones belong to U.S. Customs and Border Protection, which operates eight Predators on the country’s northern and southwestern borders to search for illegal immigrants and smugglers. The previously unreported use of its drones to assist local, state and federal law enforcement has occurred without any public acknowledgment or debate.

Congress first authorized Customs and Border Protection to buy unarmed Predators in 2005. Officials in charge of the fleet cite broad authority to work with police from budget requests to Congress that cite “interior law enforcement support” as part of their mission.

In an interview, Michael C. Kostelnik, a retired Air Force general who heads the office that supervises the drones, said Predators are flown “in many areas around the country, not only for federal operators, but also for state and local law enforcement and emergency responders in times of crisis.”

But former Rep. Jane Harman (D-Venice), who sat on the House homeland security intelligence subcommittee at the time and served as its chairwoman from 2007 until early this year, said no one ever discussed using Predators to help local police serve warrants or do other basic work.

“There is no question that this could become something that people will regret,” said Harman, who resigned from the House in February and now heads the Woodrow Wilson International Center for Scholars, a Washington think tank.

In 2008 and 2010, Harman helped beat back efforts by Homeland Security officials to use imagery from military satellites to help domestic terrorism investigations. Congress blocked the proposal on grounds it would violate the Posse Comitatus Act, which bars the military from taking a police role on U.S. soil.

Proponents say the high-resolution cameras, heat sensors and sophisticated radar on the border protection drones can help track criminal activity in the United States, just as the CIA uses Predators and other drones to spy on militants in Pakistan, nuclear sites in Iran and other targets around the globe.

For decades, U.S. courts have allowed law enforcement to conduct aerial surveillance without a warrant. They have ruled that what a person does in the open, even behind a backyard fence, can be seen from a passing airplane and is not protected by privacy laws.

Advocates say Predators are simply more effective than other planes. Flying out of earshot and out of sight, a Predator B can watch a target for 20 hours nonstop, far longer than any police helicopter or manned aircraft.

“I am for the use of drones,” said Howard Safir, former head of operations for the U.S. Marshals Service and former New York City police commissioner. He said drones could help police in manhunts, hostage situations and other difficult cases.

But privacy advocates say drones help police snoop on citizens in ways that push current law to the breaking point.

“Any time you have a tool like that in the hands of law enforcement that makes it easier to do surveillance, they will do more of it,” said Ryan Calo, director for privacy and robotics at the Stanford Law School’s Center for Internet and Society.
Source: Los Angeles Times (Brian Bennett)