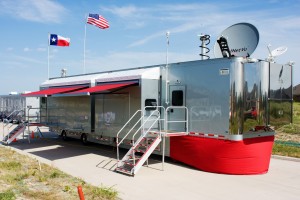 As thousands of football fans file into Lucas Oil Stadium for Super Bowl XLVI on Sunday (Feb. 5), they can rest assured that Verizon is working to protect their “blind side.”

Verizon has deployed its state-of-the-art mobile command center near the stadium to serve as a backup emergency operations center for the city of Indianapolis during the Super Bowl.

Featuring four large slide-out sections and 700 square feet of inside workspace, the command center was designed under the guidance of Verizon’s Chief Business Continuity Officer Dick Price, a Hoosier who started his career in public safety more than three decades ago with the Warren Township (Ind.) Fire Department.

The concept of a self-sufficient mobile command center was generated by the company’s experience in the devastating hurricanes of Katrina and Rita, which rocked the Gulf Coast in 2005.

“We were in Louisiana for four months after Hurricane Katrina, repairing our network facilities,” Price said.  “Like any major natural disaster, when a large portion of our communications network infrastructure is damaged or destroyed, we need to be on-site for long periods of time, working with numerous local and state officials and federal agencies as our network teams rebuild the network.  This command center is critical to Verizon’s needs and our customers’ needs in an emergency.”

Inside the Verizon mobile command center are 13 individual work stations with access to voice, data, Internet and video; intercom systems; individual computer panels and TV screens; a large map plotter, printer and fax machine; and a weather station.  The cross-patched audio systems in the command center also can connect to most U.S. domestic emergency radio systems, including the Metropolitan Emergency Communications Agency in Marion County, which provides radio communications to emergency responders in central Indiana.

The command center also has access to a specialized radio network linked directly to the Federal Emergency Management Agency.

When Verizon designed the command center, the company not only wanted to meet the needs of its employees and customers, but also the needs of local and state officials and federal agencies responding to disasters.  For example, the rig includes a 48-inch plotter used for printing large wall-sized maps, allowing public agency responders to review large printouts of the impacted region.

“Whatever we can do as a good corporate citizen to share our assets with others while we are working to repair our network infrastructure or working at a major venue like the Super Bowl will result in a win-win for everyone,” Price said.

Price, who graduated from Purdue University and received a Distinguished Technology Alumnus Award, also has been acknowledged for creating the communications industry’s first hazardous materials response team.  The 30-member Verizon hazmat team, known as the Major Emergency Response Incident Team (MERIT), oversees the tactical response to major incidents by coordinating the use of assets and personnel according to National Incident Management System protocols.  Five members of the Verizon MERIT team are in Indianapolis.