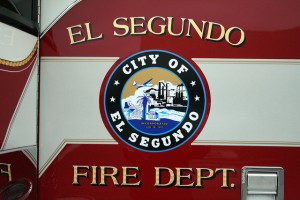 Almost 2,700 El Segundo residents turned out to cast their votes on April 10 against Measure P in a resounding move to keep the fire services local. They decided not to dismantle the City of El Segundo Fire Department, formed in 1917, and consolidate its services into the Consolidated Fire Protection District of Los Angeles County (LACoFD).

Facing a running deficit of $8.7 million in 2009, El Segundo officials contacted LACoFD to request a proposal for fire protection, paramedic and incidental services. At that time, the Board of Supervisors directed that criteria regarding liabilities, benefits and financial risk now be included in future service proposals. Specifically, the criteria includes whether a city shares boundaries with others served by LACoFD, is financially viable and whether or not there is a reciprocal benefit to County residents.

Based on these new guidelines, the Department prepared a 35-page feasibility study outlining its recommendations to annex the City into the Fire District, at a total 2010-11 estimated cost of $10.1 million to operate its two fire stations, as well as provide specialized District resources, such as hazardous materials, and urban search and rescue squads. A one-time conversion cost of $700,000 would be used to transform their fire stations, vehicles, and personnel equipment to LACoFD’s standards.

The proposed measure generated much debate in the five-square-mile city of 16,000 residents but the El Segundo Firefighters Association, the local firefighter union, funded the measure and collected enough signatures to keep it on the ballot. In an article published on April 8 in The Daily Breeze, El Segundo Fire Chief Kevin Smith stated that his department had already lost 15 firefighting positions and five administrative support job in the past two years. “It’s clear to me that the county would provide better fire protection services to the community than we’re able to provide at this point,” Smith said.

At the end of voting day, however, only 294 residents voted yes on Measure P, putting the issue to rest. While El Segundo’s debate is over, other cities struggling with budget deficits continue to seek consolidation options. In Montebello, city officials overwhelmingly rejected the mayor’s May 10 proposal to study the costs of transferring fire protection to LACoFD, voting 4-1 against going forward. West Covina officials also rejected a proposal last February to contract with LACoFD to help close a projected $5.6 million budget deficit for its next fiscal year, electing to make other budget cuts instead. Still looking at a possible annexation into the Fire District is the Monterey Park City Council, who voted last week to move forward with a special committee to evaluate whether residents should vote to transfer fire services to LACoFD.